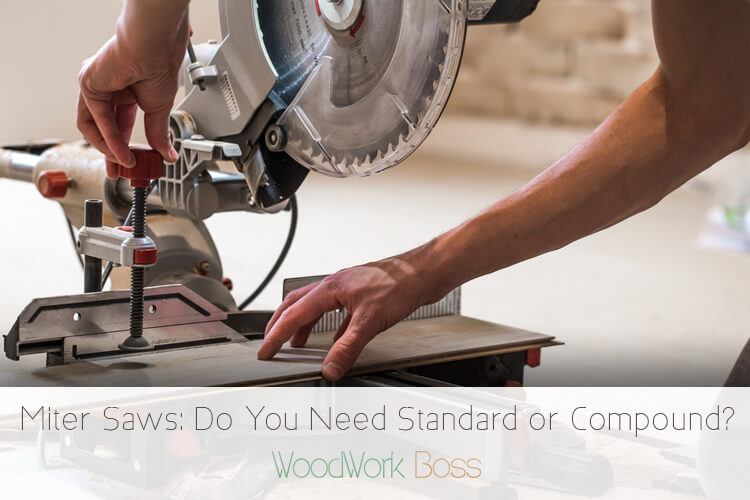 Miter Saws: Do You Need Standard or Compound?

As with almost any decision when it comes to buying a miter saw, whether to get a standard miter saw or a compound miter saw will depend on how you’ll be using it.

We’ll quickly explain the differences between these types, and then talk about what to look for in each.

A miter is a crosscut at an angle, you probably know that already.

So a miter saw is named as such, because it’s designed to make these sorts of cuts.

The saw arm and attached blade can be adjusted horizontally to an angle generally from -45 to +45 degrees, while the work piece is held firmly against the fence at 90 degrees during the cut.

This is all the functionality you’ll get from a miter saw – and, this is probably what you’ll mostly use one for, since compound cuts tend to be less common.

Or maybe you make compound cuts pretty often, in which case compound miter saw would be the better choice.

Although it is worth noting that these saws will also be more expensive.

A compound miter saw can make three types of cut: a miter cut, a beveled cut, and a compound cut.

Beveled cuts are when the the cut surface is angled. So imagine a 90 degree crosscut, but the end is angled rather than flat.

To make these cuts, a miter saw needs to pivot from side to side – which changes the angle of the blade in relation to the top of the work piece, making for beveled cuts.

A compound cut is one that not only has a miter (as in the previous section), but also has a bevel too.

So to make a compound cut, the blade would be angled horizontally while also tilted left or right.

The blades on a compound miter saws can tilt either left or right, or both.

But on the other hand, if you’ll use the double bevel frequently and it’ll save you time and energy, then perhaps it’s worth the extra cost.

What to look for

As you can imagine, having a tool capable of holding a high speed blade in all these different positions and angles makes for an engineering challenge.

This is especially true with compound miter saws, where they’ve got to both angle horizontally and tilt left or right, while also remaining very secure and precise as the blade ticks away at up to 5000 RPM.

Needless to say, miter and bevel adjust settings that lock very securely in place are a must.

They should also be easy to adjust, and precise.

Ideally, it would be a breeze to unlock the setting, re-set it where you need, and then lock it again with a simple turn of the wrist.

That’s not always the case, though. Some miter saws will fight you a bit. Maybe they’re a bit sticky to lock or unlock, or don’t adjust smoothly, and so on.

And precision! Precision of course, is essential.

Some saws will go just where you want them with ease, and others will make you adjust it a bit more to get it just right.

You won’t find it at all surprising to hear that the saws that make this stuff really easy are the more expensive options.

There’ll also often be locking points at common angles, which can make it very fast and easy to lock in a precise setting.

This should be everything you need to know about the miter and bevel capabilities of miter saws.

Compound miter saws (and double bevel) will be more expensive, so you really shouldn’t buy one if you’re not going to need it.

This is especially true if you already have a table saw, as they can easily make compound cuts.

On the other hand, if you’re regularly using all sorts of complex compound cuts, then a compound miter saw could be perfect for you.

As I find myself saying over and over again on the topic of buying powertools – it all comes down to how you plan on using it.