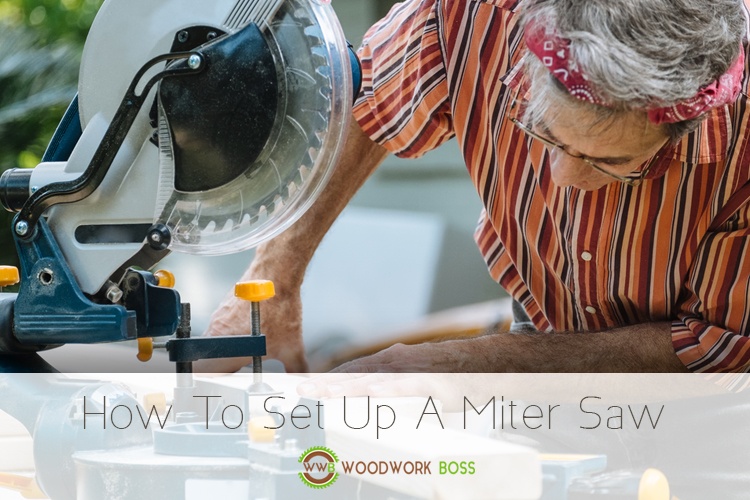 How To Set Up A Miter Saw

After purchasing a new miter saw, you shouldn’t just set it up and start working.

The very first thing you’ve gotta do is make sure she’s cutting square and accurate – without doing this, you really can’t rely on the miter saw to make accurate cuts.

This isn’t something you can eyeball either.. you’ve got to do some testing and adjusting to make sure you’ve got it just right.

This isn’t just something for a new miter saw. You should give any of these saws you own a little tune up every now and then to make sure it’s still cutting as intended.

There’s a few different ways to get this done. Many woodworkers like to put a square between the fence and blade to make sure it’s perfectly square.. The problem with this method is that having squareness while not in a cut is one thing, but having the saw actually make square cuts is another.

There could be slight differences between the two, so we feel it’s best to setup your miter saw for squareness by making test cuts and adjusting. That’s what we’ll be focusing on in this article.

We’ll start by checking the squareness of the miter saw for a standard 90 degree crosscut.

After that, we’ll discuss checking accuracy for bevels and miters.

As mentioned, we’ll be testing and adjust the miter saw by making actual cuts.

To do this, we’ll need some test pieces.

You’ll need 2 pieces, both with a perfectly flat edge. Also, these pieces should be close to the maximum cutting width of your miter saw to ensure highest accuracy.

Then, press and hold both edges firmly against the fence, and make a 90 degree cut.

Don’t just skim off the end of the pieces, try to have a good chuck of material on either side of the cut.

After making the cut, take your test pieces and place the edges flat on the cutting table.

At the same time, push the edges that were just cut together. If the saw is cutting perfectly, the two pieces should sit together cleanly with no gap.

If there’s a gap between the pieces though, it’s because the saw isn’t cutting perfectly and requires some adjusting.

Now it’s just a matter of checking the saws manual, and adjusting the saw as required.

Adjust, then make another cut. Repeat as needed until the miter saw is cutting accurately.

You can probably figure out this part of the process by reading the previous steps, as it’s very similar.

This time, hold your test pieces together again. Except put the flat edges against the cutting surface, standing tall against the fence.

Now simply make a cut, then place the cut edges together and check for a gap.

If there’s a gap, adjust and try again.

Repeat until the saw is making perfectly accurate bevel cuts.

Same as the first time, hold the test pieces together and place the flat edges against the fence.

Set the saw to a 45 degree miter, and make a test cut through the test pieces.

Now hold the mitered edges together flat on your cutting surface, and place a square in the corner of the joint.

If there’s any gaps, then adjust and repeat until it’s cutting accurately.

So there you have it, a quick and easy way to check the accuracy of your miter saw.

This is the very first thing you should do when you get a new miter saw.

And don’t forget to repeat the process now and then to ensure continued accuracy.

It’s better to do this regularly so you can always be confident in the accuracy of your cuts.. otherwise you might have to find out the hard way that it’s not cutting right.

The hard way, of course, is that you start getting bad cuts.

Not only could that have a terrible impact on a project if you don’t notice.. but it’s also a waste of lumber.