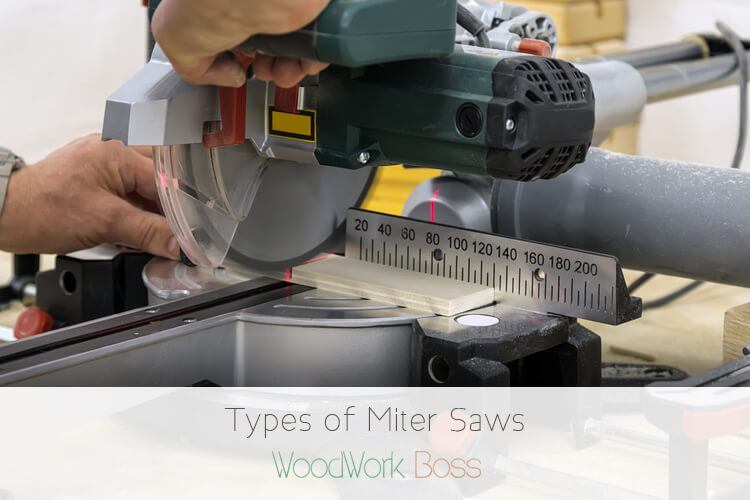 A miter saw sits on a fixed base, with a blade mounted to an arm that can be pivoted horizontally from 0 degrees to -45 or +45 degrees. As the name suggests, it’s perfect for making miter cuts.

When it comes to choose the best miter saw, there’s three different types – each of which is different not only in features, but also in price.

Needless to say, the miter saws with more features will also be more expensive. It’s also important to understand the capabilities of each type, so you know which is most suitable for your needs.

Note: Have you heard the term “chop saw”? This is something like a miter saw – except with no ability to pivot the arm and blade. Meaning a chop saw can only make straight 90 degree cuts. They’re not so common these days, as a miter saw is more capable and of comparable price.

This is the simplest version of a miter saw – a blade on an arm, mounted to the base, and generally capable of making cuts between -45 and +45 degrees.

These are easy and quick to use, and absolutely perfect for making quick miter cuts. They tend to be pretty lightweight too, making for easy transport if needed, and comfortable use.

Another big benefit of the standard miter saw is the price.

They offer some solid functionality for a very affordable price tag compared to the other more feature-rich miter saws. 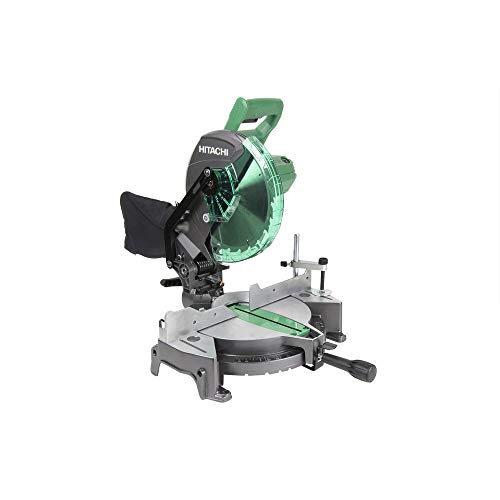 Do you know what a “compound” cut is?

If you do, it’ll be easy to guess the function of a compound miter saw.

But if not: A compound cut features not only a miter (an angled crosscut), but also a bevel (a sloped cut).

So a compound cut is both angled and beveled – which is exactly what a compound miter saw allows you to do.

Side note: Can you imagine how difficult it would be to get a precise compound cut with only hand tools? Yikes! Great times we live in, with amazing powertools to make things easier.

These saws features the same miter angle options, with adjusting the angle of blade and arm on the base – and also feature a blade tilt mechanism.

The blade can tilt 0 to 45 degrees left or right. This allows you to make crosscuts, miter cuts, bevel cuts, or compound cuts.

Actually, not all compound miter saw blades can tilt both right and left… Which brings me to the next important thing to know about these miter saws.

A compound miter saw will of course offer more functionality than a standard miter saw – but you should really ask yourself if you need this additional function, as a compound will be more expensive than standard.

Compound miter saws are great for many cuts – but, their limited cutting capacity is an easy thing to criticize.

Standard and compound miter saws have blades attached to an arm, which is attached to the base of the saw. The arm is fixed in place, meaning the blade can only move up and down – which means the width of stock you can work with is pretty limited.

As you might guess from the name, the arm is no longer fixed in place. Instead, the arm and blade are fitted to a sliding mechanism which means the blade can move in and out, as well as up and down.

Depending on the length of slide, this can double or triple the cutting capacity.

These are the most feature-rich miter saws, and so of course they’re also the most expensive. You get a lot of extra bang for your buck though, as adding extra cutting capacity is a pretty huge feature.

With that being said, you should of course question whether or not this is actually a feature you’ll use regularly – otherwise it could turn into a waste of money.

These are sliding compound saws – so they can do the in and out sliding magic, and also make miter and bevel cuts.

And That’s All, Folks!

This is pretty much all you need to know in terms of the different types of miter saws available today.

Although, you’ll definitely need more information than this to make a great buying decision.

There’s many important features in a miter saw, and you really need to understand them so you can find the best fit for your needs.

With that said, this is enough to get you started, and you probably already have a rough idea of which broad type of miter saw is right for you.