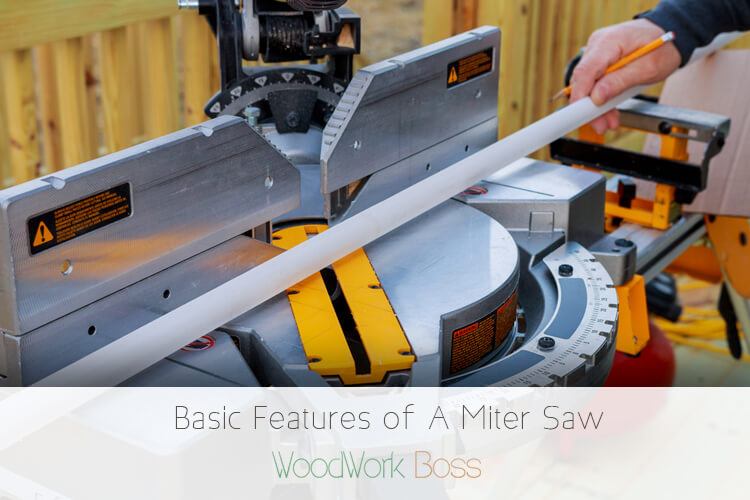 Basic Features of a Miter Saw

We’ll be breaking down the basic features of miter saws in this article – covering those features that are important, but not quite significant enough to merit their own article.

These are the motor, handle, fence, blade, dust collection, stand, and laser guide.

We also have separate articles for the more significant features, which you can find below.

The aim of this article (and those ones above) is to give you a clear understanding of the important things to know about miter saws before firstly deciding if you need to buy one, and secondly which one will best suit your needs.

So with all that out of the way, let’s get started.

There’s not much to say about miter saw motors. Obviously, they’re what makes the tool tick and gives power to the blade, but most miter saws have comparable motors.

They’ll generally all have about the same power and draw 10 to 15 amps. Horse power and RPM are also generally very similar – and, there’s none of these motors that are standouts in terms of longevity or reliability either.

The length of a motors life will come down to how you treat it – whether or not you’re using dust collection, how often you service the tool, and so on.

You should just make sure your miter saw of choice has enough power to handle the applications you have in mind.

Another note, is that sometimes the motor positioning can be a hinderance. Side mounted motors can sometimes reduce the saws cutting depth on thick pieces, because the motor hits the piece before the blade is lowered all the way through.

To solve this, you’ll find some miter saws that have motors mounted at 45 degrees – a useful feature if you’re planning to cut thick or high stock.

You might think that the handle is just about how comfortable you are when using the tool – and that’s certainly a part, but there is more to it.

Some handles might not just be uncomfortable but also cause actual fatigue or aches with prolonged use – not desirable. Miter saws (and other power tools) are supposed to help your work, not hinder it.

The handle also houses the trigger, which is what starts the dangerous blade. You want confidence in this feature – that it will reliably start and stop, and generally behave as you expect it to.

Being comfortable during use will also likely improve the quality of your work.

There’s more importance to a handle than you might at first expect!

The fence on a miter saw is positioned below the blade. It remains still during use of the saw, and is used to hold your piece straight and steady while the blade is lowered to cut at the correct angle.

Most of these will have measurements on them to help you position stock, and that’s useful.

Another thing to consider is the height of the fence. Some of these miter saws have a really low fence.. which is fine if you’re only cutting thin stock.

But if you’re cutting something that’s either thick or high, you’ll want a high fence that can support the piece all the way to the top, or near it.

Other than that, the fence should of course be nice and sturdy. Any fence worth it’s salt will be, but it can’t hurt to double check.

We have a whole article to discuss miter saw blades, which you can find here.

That article covers everything about blades – different types and their uses, breakdown of features, and so on.

This section however is much smaller, and simply to cover some of the basics.

Firstly the blade size. You can get miter saws with different sizes, but they’re mostly run blades that are between 8 and 12 inches.

This is again a spot where you’ve got to consider what you’ll be using the saw for.. if you only need a 10 inch saw, then don’t overdo it and get a 12 inch.

And you’ll be wanting to buy blades – the blades that come with miter saws (and most other power tools) tend to be pretty bad.. a good blade has an incredible impact on the quality of your work, and you’ll definitely want to replace the “stock” one that comes with your saw.

You should also consider how often you’ll need to change the blade.

Some miter saws make this a really quick job – and then for others, it’s as if you have to start dis-assembling the darn thing!

If you want to change saws frequently, make sure to get a saw that doesn’t fight you in this department.

Lastly, miter saws can’t run dado stacks (at least none that I know). That would be damn cool though, right?

I was really tempted to give this it’s own article.

But, it’s not really something that’ll effect the core function of your miter saw – as in, even amazing dust collection features on a poor miter saw won’t impact the it’s ability to provide quality cuts.

So it didn’t really feel like it deserved a whole article, although there is a lot to say. But I’ll try to keep it trim.

The best that most will give you is a dust collection bag… but, these generally will catch barely any dust.

For dust collection on a miter saw that’s actually effective, you need a large hood or cover behind the saw. And then ideally pair that with a shop vac.

As you can see from the picture above, dust collection can be a real pain on these tools.

That’s pretty much it.. if you put in the effort you can do dust collection effectively. But it’ll take some effort, and it’ll take up some space.

Most miter saws don’t come with a stand, although sometimes you’ll see them offered as extras.

That’s because pretty often you don’t actually need a stand for your miter saw. It’ll do just fine when sitting on a bench.

If you do need a stand, you’ll probably have to buy one separately. Even if the miter saw you’re buying offers one as an extra, I’d still encourage you to check the quality of it and compare to the quality and price of other stand options.

Obviously a stand should be sturdy and able to support the weight of your miter saw.

And, depending on what you’re using the saw for, maybe a stand should also be lightweight and easy to transport.

Of course there’s stands of all different qualities – some do their job great, and some fight you a bit.

But maybe you’re willing to fight if it saves you some cash up front?

As with all of this, it depends on your situation and requirements.

Some miter saws come with laser guides, which can be particularly handy on a saw like this with all the different angles and setups that can be involved between both miters and bevels.

The laser basically projects on your work piece to show exactly where the blade will cut.

Some saws will have them, but most don’t. They’re sort of useful, but realistically a laser guide isn’t essential and won’t make that much of an impact on the quality of cuts produced by your miter saw.

So that’s it for what we consider the basic features of a miter saw.

Hopefully this article gives you a good foundation of knowledge to aid your purchasing decision!

As mentioned in the introduction, I encourage you to check out our other articles which go more in-depth on the more significant features of miter saws.