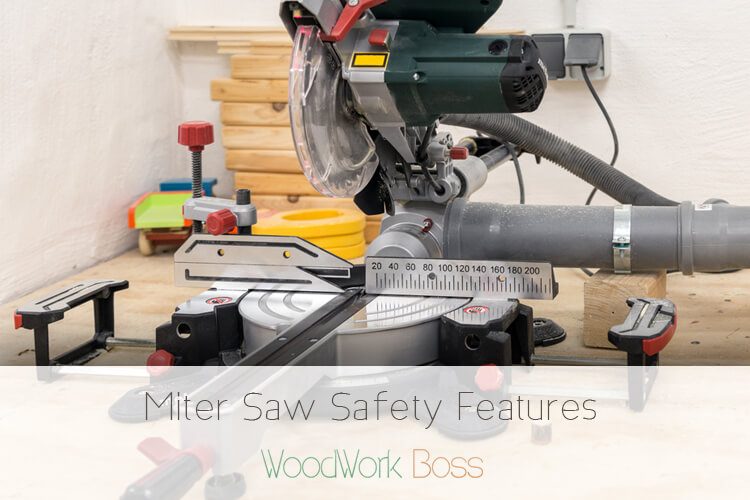 Even if you’ve never worked with or spent time around power tools, you can probably already tell that they’re super dangerous.

Especially with saws – miter saws, table saws, circular saws. These are powerful beasts that will chop your fingers off (or worse) if you mistreat them.

So of course, safety features are very important on any powered saw, but today we’ll be running through safety features of miter saws so you know what to look for before buying.

Miter saw blades generally run at somewhere in the region of 3000-5000 RPM.

That’s the type of power and speed you need to make quality cuts, of course. But even after you release the power trigger, a blade going that fast isn’t going to stop for a while.

This might be even more dangerous than when you’re actually using the saw. The motor is powered off, but this blade is still silently ripping around just waiting for someone to not realize it was recently powered on, and have an accident.

These brakes are a common safety feature on miter saws, designed to quickly slow and stop the blade after you’ve released the power trigger.

This is a pretty crucial safety feature, so keep an eye out for it.

If you’re checking out a miter saw and it doesn’t have a blade guard, then you should forget it.

Not because a blade guard is an essential safety feature (it is), but also because it’s hard to trust the overall quality of a modern tool that overlooks such a basic and important feature.

As the name suggests, the blade guard on a miter saw covers the blade when the arm is raised, and then raises away from the blade as the arm is moved downwards, allowing the blade clear access to the cutting piece.

As you raise the arm again, the guard lowers back over the blade.

These are crucial safety features on a miter saw, but they can also be a bit of a pain.

Many saw users complain that they hinder the view of the blade and work piece, which can hamper both cut quality and safety. This is especially true for a guard that isn’t see through.

You’ll want a blade guard on your miter saw to keep your fingers safe – just make sure it’s see through.

When using a miter saw, you hold your piece firmly against the fence while cutting.

This is too hold the piece steadily in place when making a cut, so that it turns out clean and precise. Beyond that, holding your piece steady is also important for safety.

Kickback isn’t really an issue with miter saws (as it is with table saws), but you still don’t want whatever material you’re cutting to get flung around somehow by the saw – so, holding the piece steady while the blade works is very important.

Safety clamps, as the name suggests, are used to clamp your material to the miter saw fence.

Clamps are arguably stronger and more precise than your own grip – meaning they’ll lead to not only a higher quality cut, but also increased safety.

This is another one of those crucial safety features, and it’s included on most miter saws these days.

The trigger is on the saw handle, and it must be depressed to start the blade spinning.

So the blade will only be powered on when your hand is firmly depressing the trigger – that’s a nice feature, and it essentially eliminates the risk of the saw being started by mistake.

You could imagine how dangerous a miter saw could be if it started up with a power button somewhere on the base, similar to a table saw.

The user of any power tool (especially saws) is the best safety feature.

Always take care when using any power tool. In the case of miter saws, you should know what you’re doing and have a plan for your cut.

Double or triple check everything is set up correctly, then execute the cut, and kill the saw. Always be mindful and pay attention.

It only takes one little lapse in concentration for a life-changing accident to happen. Always respect these powerful saws.

If you’re vigilant in your use and running the right safety features, you’ll be just fine and the miter saw can do what it’s made for – delivering quality results and make your life easier.