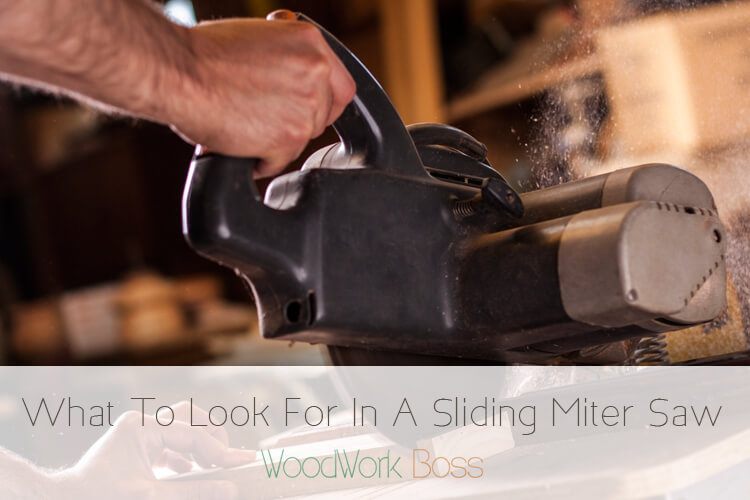 What To Look For In A Sliding Miter Saw

The arm can’t extend up or down, only pivot up and down in a fixed arc from it’s pivot point attachment to the base.

The arm can also be adjusted horizontally to set the miter angle, and also tilted from side to side to set a bevel angle, if it’s a compound miter saw – but that’s not what we’re talking about in this article.

The obvious disadvantage of a blade that can only move in a fixed arc is that your cutting capacity can be fairly limited – If your blade can’t reach the outside edge of your piece, then you’d have to cut as deep as possible before flipping the piece and finishing the cut.

This can be pretty tricky and lead to bad cuts. And even aside from that, it still makes the cutting capacity fairly limited when compared to something like a table saw.

These aim to solve this problem by having the blade be able to not only move in a fixed arc, but also slide outwards.

This can greatly increase the cutting capacity, and so is a very desirable feature.

A sliding feature is only generally found on a compound miter saw, and not standard miter saws.

So, the benefit of a sliding miter saw is obvious – increased cutting capacity. But there’s also a few drawbacks and things to be aware of, before we get too excited.

A sliding mechanism sure does make a miter saw a very capable tool indeed, but there are some definite trade-offs.

And these extend beyond just the higher price tag.

First things first – although a sliding compound miter saw definitely has the coolest name of any miter saw, it’s also the most expensive type available today.

So with that said, if you don’t need the extra cutting capacity then you should probably stick to a standard or compound miter saw. Whichever fits your needs best.

When an arm and blade only need to move in a fixed arc, it makes the base of the saw nice and neat.

This isn’t the case with sliding miter saw however.

The arm is generally mounted with horizontal tubes on the base, which slide in and out with the arm and blade.

This means that as the blade is sliding backwards, the tubes need space behind the saw to extend into.

So you basically need a gap of a few feet behind your sliding miter saw at all times.. that’s a lot of wasted space, especially if you’re in a shop where it’s already limited.

Deflection of a saw blade – have you heard of that?

It’s when the blade is a little off balance, and moves slightly from side to side while it’s spinning.

Of course if this issue is bad enough, it can have an awful impact on the precision and quality of your cuts.
What prevents blade deflection on a miter saw is a secure anchor for the arm and blade.

This is pretty easy for a manufacturer to achieve on a standard or compound miter saw – but, that’s a different story with a sliding miter saw.

A sliding arm is not only inherently less stable because of the ability to slide, but at full stretch it also requires more force to keep the blade secure and steady.

Most manufacturers can deal with this pretty well, but it’s definitely something you need to keep an eye on.

There are obviously some significant drawbacks to a sliding arm on a miter saw at the moment, but some manufacturers are working on solutions.

The most significant of these draw backs is probably the space requirement at the back of the tool.

Some are trying to break the sliding mechanism into two or three arms which are all mounted on top of one another and slide one after the other, which leads to some space saving at the back.

There’s also designs which have more complex arm systems, with several connections and arms that all work together to slide the blade in and out from a fixed position.

New innovations on miter saws are of course going to make them more expensive than the other options, so that’s something to keep in mind too.

The sliding compound miter saw is the most capable option of all miter saws, and now you should know what to look for should you choose to purchase one.

The sliding functionality adds a lot of capability to a miter saw, but it’s also more expensive, and the additionally functionality can also be found on other types of saws.

For example, maybe you have a table saw – in that case, you may not need the extra functionality of a sliding arm on your miter saw at all.

Needless to say, there’s plenty to consider when it comes to choosing the right miter saw for you!