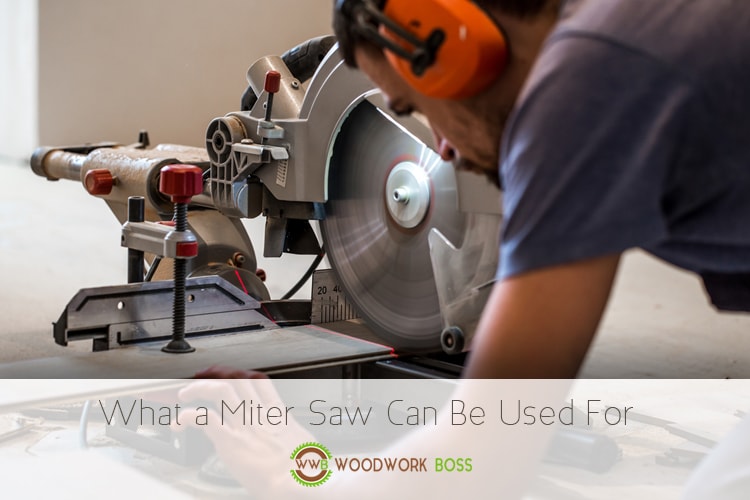 What a Miter Saw Can Be Used For

I have always been in love with making things, especially woodworking. When I started high school my first actual experience working with a power tool was a compound miter saw I used to cut 2x4s for building a theater set, and four years later when I was 17 it was also the first saw I purchased for my own use. I would argue that a miter saw is one of the most useful saws that a novice woodworker can have in their shop, they’re easy to use and have many functions they can perform.

A miter saw, also commonly called a chop saw, has the latter function, moving the blade through your material. A miter saw can perform various functions such as making cross cuts, repeated cuts with accuracy and miters. In this article, I will be covering all of these topics as well as some general information about miter saws.

To begin let’s look at the two cuts miter saws perform, cross cuts and miters. A cross cut is a cut made across the grain of a piece of wood at a right angle, this is particularly useful for squaring up the ends of boards and preparing materials for butt joints. A miter is a cut made once again across the grain of a board but at an angle. A miter saw has the ability to rotate its base and therefore changing the angle the blade comes down onto your material at, creating angled cuts.

Typically a miter saw will also have commonly used angles such as 45 and 22.5 degrees marked along its base so you know how far you have rotated your saw. Miters are commonly used in picture frame making, jewelry box making and any other project where the joints will be seen.

Another function of miters saws which makes them incredibly useful is their ability to produce repeated cuts at exactly the same length when used in combination with a stop block.

A stop block, in general, is a piece of material that you clamp along the fence of your miter saw a certain distance away from the blade. When making repeated cuts you adjust the distance the block is away from your saw blade to the desired length of the cut you’re making, press the end of your material against the stop block and proceed to make a cut as normal.

This creates a quick and easy way to make a lot of cuts that are all exactly the same length and can be made in a short amount of time.

Miter saws also usually have the ability to tilt the angle of the blade as well, allowing you another way to make angled cuts besides rotating the base of the saw. As with rotating the base of the saw, when you tilt the blade there will almost always be indicators as to how far you have tilted your saw so you know the exact angle you will be cutting at.

You can use the two ways of adjusting your saws angle in combination with each other to produce very complex angles that would be difficult to recreate on most other types of saws. It’s worth noting that not all saws advertised as miter saws have this function so be sure to research saws carefully before purchasing one if you want it to include this feature.

As far as safety concerns and practices for miter saws, they really are in general very safe to use, however, like any power tool there are things you need to account for before using it.

The first of which being make sure you have your material firmly pressed against the fence of the saw. Allowing a piece to sit freely on the saw’s base could allow it to rotate and bind in the saw blade during the cut and in turn, throw the piece out of the work space. Beyond that, just use common sense, keep your fingers away from the blade and make sure to routinely tune your miter saw.

A miter saw is a wonderful tool to have in your shop especially as a beginner, it’s easy to use and fairly safe to operate. A well taken care of miter saw can last you for years and is definitely going to be a tool you will use often once you have one.