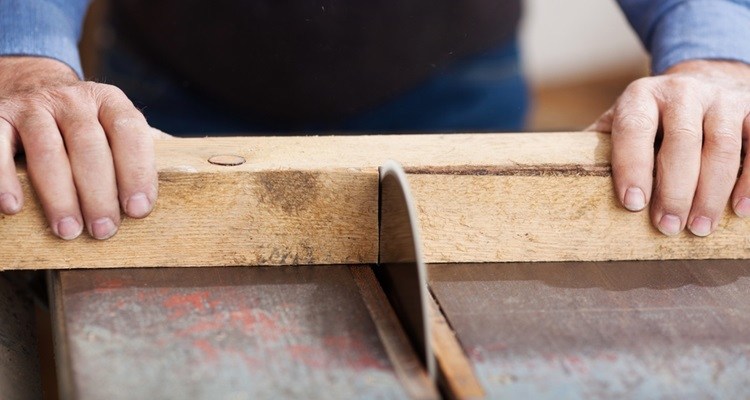 Do you need a miter or table saw? That’s a question we’re going to answer today as we explain the differences between the two popular pieces of woodworking equipment.

In our guide, we will break down the pros and cons of each model so you can decide who the true winner is on our miter saw vs table saw battle. We have also selected a couple of saws that are workhorses and great choices for your woodshop regardless of your preference.

Which is better: Miter Saw or a Table Saw?

Before you can decide which type of saw is better, you must understand what they do, and the types of tasks each are best suited for. Both styles are capable machines that you’re likely to find in any wood shop, but there are some big differences between the two.

A miter saw is simply a new version of an old favorite – the chop saw.

We aren’t going to focus on those today, but you can learn more about those models in our complete guide to the best miter saws.

With miter saws, the advantages far outweigh the disadvantages.

They are capable of handling trim work with ease and can make quicker angled cuts than a table saw. Miter saws are also more affordable and generally considered safer for a couple of reasons.

One would be the fact they aren’t built to deal with long, rough material so kickback won’t be a major issue. They also typically come with a brake system that kills the power as soon as you let off the trigger. In short, the blade will stop a lot faster and won’t carry a much force if it does come into contact with skin or cloth.

Portability is another major advantage considering you can fold the handle down, lock the saw and pop it in the trunk or store it when it’s not in use.

While miter saws are great at cutting angles, they aren’t great at making long cuts or ripping stock.

Another drawback would be power, even though you can find models with larger motors. They just aren’t built to handle jobs where you need to cut large stock and a consistent basis and may not hold up as well over time as a table saw.

Whereas miter saws are great for smaller projects and quick cuts, a table saw will be the beast of your workshop and a tool you’ll wonder how you ever lived without.

There are some hybrid table saw models as well including models built for use on construction sites that you can carry around and industrial saws that way hundreds of pounds.

The biggest advantage of this saw is the one glaring negative of the miter saw; it can handle thick stock and long pieces of lumber.

Table saws are ideal for almost any type of project as they have more power and a broader range of capabilities. It can still handle angles as well although you will need a miter gauge and some practice if you’ve never used this style of saw.

Whether you want to frame a house, build cabinets or simply cut stock to a specific width, a good table saw will get the job done.

Due to their design and the size of stock you can work with, table saws can kick back and generally do not come with as many safety features as miter saws.

Guards are far and few between, and as mentioned, you can’t do angled cuts without an additional tool. They are also considerably more expensive than an entry-level miter saw, and the price only goes up when you move to larger, more powerful models.

Use a miter saw when…

If you want to make quick cuts with accuracy and have used a chop saw, you’ll feel right at home with a miter saw. They are ideal for situations where speed is key and great for beginners that aren’t experienced with this type of tool as well.

When you need to cut crown molding, deal with door frames or even want to make a picture frame, stick with your miter saw.

Use a table saw when…

It may not be ideal for angles, but you will have no issues using a table saw to do joinery with a Dado blade. The table saw is a surprisingly versatile tool given its stationary nature.

If you don’t need to cut channels or mortises, the table saw can rip a thick piece of oak or maple in seconds. It is the only way to go for large scale products where you need long, straight cuts consistently and it can accept a variety of blades which further expands its capabilities.

Our top option for the best miter saw comes from DeWalt and is a saw you may already be familiar with. The DWS709 is a popular option and packed full of features to make work easy whether you’re at the job site or at home.

The DeWalt DWS709 is powered by a 15 amp motor capable of hitting 3,800 RPMs. It has stainless steel detent plate with 13 positive stops and sports an oversized bevel scale as well.

Want sliding fences? It has those, and they can easily handle molding or trim. The back fence and overall construction of this model is solid all-around, and while it won’t leave a large footprint, it’s still hefty with nice weight at 51 pounds.

This saw is a great option for folks that need a powerful, but portable solution for the job site or handymen that want a reliable tool in their arsenal. You can read more about the DeWalt DWS709 in our full review if you’re still not ready to pull the trigger. 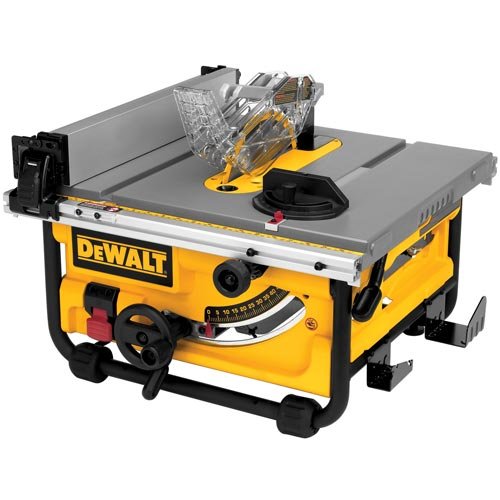 We also went with DeWalt for our top Table Saw although this one is a little different from traditional models.

Dubbed a “job site” table saw the DeWalt DWE7480 is compact but powerful. It’s a 10-inch saw that also has a 15 amp motor, but this one can hit 4,800 RPMs so you can tear through wood with ease. It has a sturdy metal roll cage base which adds stability regardless of where it sits, and you’ll get a bit of onboard storage to boot.

Other features to note for the DWE7480 would be its 24 1/2” cutting capacity, and a rack and pinion style fence system. We also like the Site-Pro modular guarding system and the 2 1/4” dust port which helps keep the table clear of dust and debris.

You can pick up this saw by itself or in a bundle with sturdy folding stand. There is also another bundle with the stand and a pack of 10” blades if you want to be ready to rock out of the box.

So who wins our miter saw vs table saw shootout? That’s up to you as it all boils down to what you need in the end.

Both tools are built to handle certain tasks but are versatile enough to do more than what there were originally designed for. In the end, we advise you to pick up both if your budget allows it or simply stick with the one you plan to use the most.