Overview of the Dewalt DWS709

Traditionally these saws are the most expensive of all miter saws, as you can see on our best sliding compound miter saw reviews page. And this makes sense, because after all they not only offer the most functionality but are also more technically challenging for a manufacturer to to construct, with all those extra moving parts to worry about.

The DWS709 has a nice surprise in the price department though, as it comes in well below the price points of similar sliding compound miter saws.And this isn’t because it’s cheaply made, or lacking quality – because it’s not either of those things.It’s a powerful and capable saw, which is very precise and offers a bundle of lovely features. It’s a pleasure to use, and simply does what it says on the tin – powerful and accurate cuts, coupled with great user-friendly features to make your life easier.

Even with all this power and extra features, it still manages to also be lightweight and portable. All of this, combined with a low price point that simply blows competitors out of the water, is what makes the Dewalt DWS709 a great sliding compound miter saw.

The DWS709 sports a powerful 15 amp, 3800 rpm motor.When it comes to reviewing the motors on miter saws, there really isn’t a whole lot to say.The motors are usually very similar in terms of power usage and output, and for the most part they operate just fine.

When choosing a miter saw, it’s better to focus on the features that do matter – the fence, miter and bevel adjustments, the sliding mechanism, and so on.

The motor in the DWS709 is more than powerful enough to deal with anything you throw at it, as it should be – with a miter saw, you’re more likely to be limited by cutting capacity than motor power.

The output will be especially effective if you have a great fit-for-purpose blade installed on your miter saw. 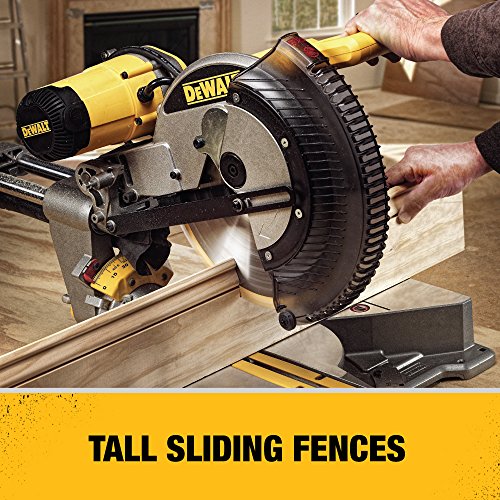 This is one of the most important things to consider when choosing a sliding compound miter saw – is it not only accurate, but reliably accurate?

This is an especially important thing to consider with sliding miter saws, as compared to non-sliding.

The extra sliding mechanism presents some engineering challenges which can cause the miter saw to be less stable and perhaps suffer some blade deflection – which, of course, can hamper accuracy greatly.I’m glad to say that the DWS709 really shines in this department.

Not only is the saw very precise even with its sliding mechanism, it also has a few features to aid accuracy.

These will be covered a little later in this review – but, there’s locking positions at common miter angles for solid precision, blown-up easy-to-read bevel measurements, and a great fence.

All of these things combined with a solid and stable construction help the user (that’s you!) to reliably make clean and accurate cuts.

As mentioned in the previous section, there’s a lot going on with these adjustments to help make your life easier.

Not only does this make your life very easy, but it ensures effortless pinpoint accuracy with your miter angles.The DWS709 also does its best to help out with setting the right bevel angles.

Tooked away in under the arm and blade, it can be difficult to read the bevel angles on some sliding compound miter saws – but that’s not the case here.

Dewalt have made these blown-up angle indicators that are very easy to see, even when standing out in front of the tool. This, once again, is done with accuracy and ease of use in mind. 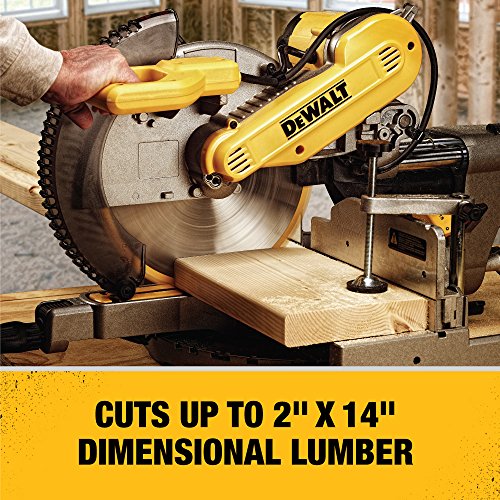 It wouldn’t be a sliding compound miter saw review if we didn’t take a second to actually talk about the sliding mechanism.

Even though making miter saws with a sliding mechanism adds complexity and challenges to the manufacturing process, when it comes to actually using the saw the sliding feature is pretty basic.It moves the arm and blade inwards and outwards to increase cutting capacity.

The additional cutting capacity is a huge benefit of course, but overall the sliding mechanism itself is pretty simple.

And that’s the case with the sliding feature on the DWS709, too – it just works as you would expect.It could maybe run a bit more smoothly, but overall it’s pretty fine.

There’s one obvious downside to mention – because the arm needs space to slide out the back of the tool, you’ll need to keep some space free behind it.

This is a pain because you can’t have it tight up against a wall – but, this is also the case with every sliding compound miter saw. That is, unless you want to spend a lot of money on a new “gliding” system that’s gaining popularity lately.

But as far as these traditional sliding mechanisms go, the Dewalt DWS709 does a great job.

The fence on the DWS709 is fairly unique for a miter saw – it’s a sliding fence.

This means it can extend upwards to offer more support for tall work pieces, meaning it can comfortably support crown molding up to 5-1/2 inches.

And if that’s not enough, there’s also some handy little holes in the fences that you can use to attach a wooden fence to add as much height as you need.

There’s also a fence clamp that helps pin the work piece securely in place while you make the cut.

Dust collection on the DWS709 is… well, it’s pretty bad.

Actually, I would go so far as to call it awful. The dust collection catches basically no dust.. you might as well not even use the dust bag that comes with this miter saw.

Although, it’s unfair to point nto this as an issue that only exists with the Dewalt DWS709.The truth this, the vast majority of miter saws have truly terrible dust collection.. they’re just tricky saws to keep clean.

They have very little housing and sit out in the open, which makes the already tricky job of dust collection even trickier.

To effectively collect saw dust with a miter saw, you need a big hood set up behind it and a powerful shop vac.

Even then, it’s probably not going to be as good as we’d all like.

That’s just one of the trade-offs when using a miter saw, though. And because of that, we can’t take points from the Dewalt DWS709 for also failing in this department.

The only additional feature offered with the DWS709 is a stand.

It’s quite a bit more expensive to get a stand with this saw, and you might want to consider other stands that don’t come from Dewalt.

Although, the stand is pretty good.

It has wide adjustable infeed and outfeed roller supports for up to 8 inches of material support, and also has easily adjustable mounting rails which can house almost any miter saw.

There’s wheels on the stand so it can be easily moved around, even when there’s a miter saw attached to it.

Overall it’s a pretty good deal, but you might want to checkout some of the other miter saw stands on the market before making your decision.

The Dewalt DWS709 is a great tool, and as mentioned at the start of this review – it won our “best sliding compound miter saw” award.

It just ticks all the boxes.

It’s not only powerful and accurate, but also very user-friendly and easy to use.

Combine all that with a price that’s MUCH lower than comparable miter saws, and you’ve got a winner.

This is yet another great product from Dewalt that will expertly serve professionals, homeowners, and hobbyists alike for many years to come. Simply a great choice for a sliding compound miter saw.

If you are looking for another compound miter saw from Dewalt, take a look at our Dewalt DW715 review as well.