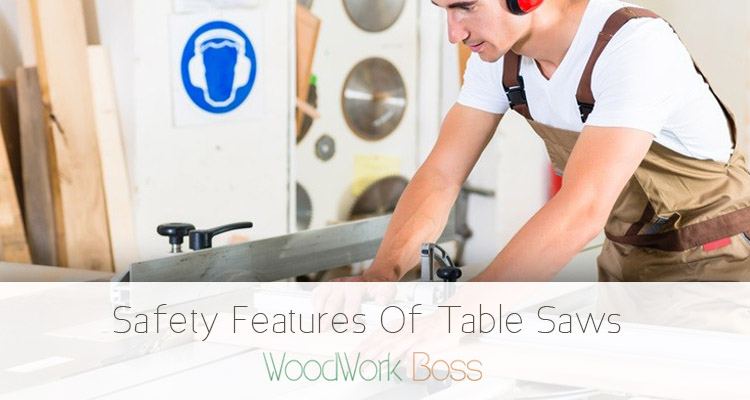 It should be clear to you just by looking at a table saw running that it has a lot of potential to cause damage – Table saw safety is crucially important.

These are dangerous tools that can cause serious injuries, and they demand your respect when using one.

Thankfully there’s a lot of table saw safety features that can help you stay safe – but no matter how good the safety features, you always need to be paying attention and work with care.

It’s important to note that this isn’t a full table saw safety guide – just a discussion about the safety features on these saws, and what to expect from them.

These are basically a cover that goes over the blade of your saw. They don’t touch the blade itself – just create a safe zone around it to get you away from the blade. It slides up and over a piece as you slide it through.

It’s a very effective feature, and some might argue the most important table saw safety feature of them all.

But it does have some downsides. For one, if it’s not made out of clear plastic then you won’t be able to see your cut as you’re making it.

It can also be a hassle when it comes to changing your blade.

For these reasons (especially the first one), many experienced woodworkers choose to not use a blade guard.

If you’re experienced enough with using a table saw, then that’s a fine choice as you’ll already be making use of other safety features and precautions.

But when starting out, it’s best to use the blade guard. As a beginner you’re prone to mistakes – and I’m sure you don’t want the penalty to be a missing finger.

As mentioned above, it’s much better if your guard is see-through so you can see what you’re doing mid-cut.

Kickback – If you know anything about table saws then I’m sure you’ve heard of it by now.

Kickback is when your piece gets somehow wrongly caught in the blade and gets thrown back rather than being cut. Thrown right back in the direction it came from – straight at you.

It occurs in two ways.

Firstly, your saw can get bogged while cutting down due to lack of power or forcing a piece into the blade too aggressively. The saw “grabs” the piece rather than cutting it, and throws it back at you.

Secondly, as your piece passes out the far side of the blade it can break away from the fence, get caught in the blade, and thrown back at you.

The first issue is best dealt with by you – don’t try to cut something thicker or harder than your saw is capable of, and if it’s getting bogged down mid-cut then definitely just stop and re-assess.

These are thin vertical pieces of metal or plastic that sit directly behind the blade – as your piece passes through, the splitter ensures that it can’t come around the back of the blade, get caught, and fired back at you.

It’s pretty simple and does a decent job, but isn’t as effective as a riving knife for several reasons.

These are very similar to splitters and do basically the same job, but more effectively.

Splitters are in a fixed position on the table near the blade, whereas a riving knife is mounted right behind the blade and moves with it.

This means no matter what height you set your blade at or what type of cut you’re doing, the riving knife moves with your blade adjustments and will always be there to do its job.

This isn’t the case with splitters.

A splitter is only useful for ripping through cuts. For crosscuts, non-through cuts, and dado cuts the splitter needs to be removed.

This can be a real annoyance.. and there’s always a temptation to just not put it back before you start ripping again. Or, you might simply forget.

For this reason, a riving knife is safer than a splitter – but there’s also another big way that it’s safer.

It’s mounted much closer to the blade than a splitter, and so there’s virtually no gap for a piece to slip through to get caught on the blade.

If you have no other option, use a splitter. But ideally you want a riving knife for all the reasons I just mentioned and it should be one of the things to look for in a table saw. For example Bosch 4100-09 jobsite table saw has great safety features, including a riving knife.

Check out this spooky near-miss video to understand why you should always use a splitter or riving knife, especially as a beginner.

You’ll see these on many table saws, they usually are attached to a splitter and are basically claws run along your piece as it’s passed through the blade.

The idea is that it’ll prevent kickback by “grabbing” the piece with the spikes of the claw to resist being thrown by the blade.

This can be good to have, but it’s probably a less important safety feature than the others we’re discussing in this article. So, that’s pretty much all you need to know!

These aren’t exactly part of the saw itself, but they’re still worth covering as they’re very important for table saw safety.

It goes without saying that you want to keep your hands away from the blade at all times when it’s turned on.

But, this also conflicts with your aim in using a table saw – to get good clean cuts in a controlled way.. It’s difficult to really control your piece without having your hands on it, and which also means having them near the blade.

Push sticks or “grippers” can help with this.. they both basically do the same job.

A push stick let’s you push your piece through the saw from a bit of a distance. It’s literally a stick designed to push wood. You can also use two at once – one to push your piece into the blade, and the other to hold it firmly against the fence.

They allow you to control your piece while keeping your hand away from the blade, and you can also stand a bit more off to the side so that in the case of a kickback you’re less likely to get hit by your now airborne lumber.

Grippers are similar, but they are designed to “grip” the top of your piece, rather than to push it.

They’re generally quite bulky and make it very easy to move your piece accurately through the saw, while keeping your hands away from danger.

Grippers are probably a bit safer than push sticks and give you both more protection and control.

You’ll see some people not bother using either of these – but it really makes me anxious. In my opinion they’re a crucial safety feature for your table saw use and it would be unreasonable and risky to not use them.

This is especially true if you’re a beginner!

You’re gonna like this bit, these sensors are some really cool technology and also an amazing safety feature.

All of the safety features discussed so far have been mostly designed to keep your hand away from the blade.. but, what happens in the case of a freak accident, where you simply can’t keep your hand from slipping into the blade?

Up until very recently there were not safety features that could deal with this, but not so anymore.

There’s a unique safety system by a company called SawStop that uses sensors to, you guessed it, stop the saw in the case of you coming in contact with it.

You’re probably thinking that this sounds useless – surely a saw is moving so fast that nothing could stop it quick enough to protect your hand in the case that it slips into the blade?

That’s where the genius of the SawStop comes in – it fires an aluminium brake into the blade and stops it dead in 0.02 seconds.

The result is so forceful that both the brake and blade will need to be replaced – but, the users hand will be left with just a scratch or small cut, rather than losing some fingers.

If it sounds too good to be true, check out the video of the creator pushing his hand into a running table saw blade. The SawStop kills the blade instantly, it’s amazing stuff.

The sensor triggers the break when it comes in contact with human skin, thanks to how conductive the skin is compared to wood. So it’ll let you saw wood, but it won’t let you saw your fingers off.

This is an amazing safety feature, and an incredible invention.

Is it possible to “over-do” it with safety features? I don’t think so…

There are some reasons to not use certain safety features, but you should always be using at least some. And as a beginner, I’d strongly suggest that you use them all until you feel very comfortable with table saws and have a lot of experience.

A lot of stuff like splitters, riving knives, and pawls come as standard on all table saws. But those and the other saftey features are all fairly cheap, so there’s no reason not to use them as a beginner.

Hopefully you’ve found this article valuable, and it can help you to not lose some fingers!