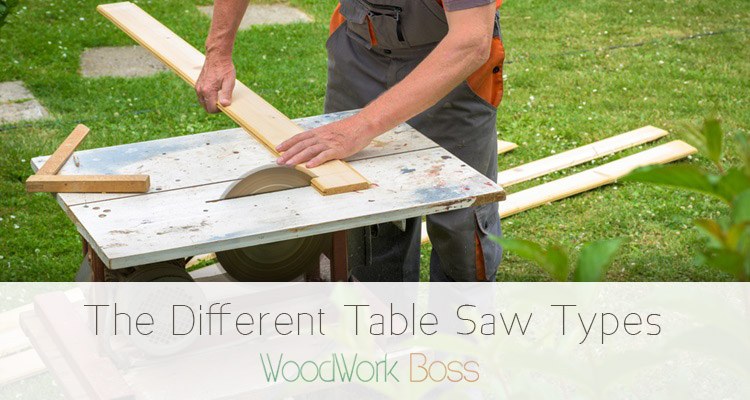 You could reasonably call these tools the heart of any woodshop. It’s a hugely useful tool that can do a variety of cuts thanks to have many different types of table saws available.

Although you can get by without one, if you’re focused on furniture making or larger projects it’ll make your life much easier. After adding one of these to your shop, you’ll find yourself using it at some point or another for the vast majority of your projects.

We could spend all day talking about their usefulness, but that’s a topic of another article.

In this article we’re focusing on an overview of the different table saw types. The ultimate aim is for you understand which type is best for your needs, to aid your buying decision.

Portability, Functionality, Or Both?

These tools can generally be broken down into two categories: portable and stationary. And, there’s other sub-types within these categories.

We’ll circle back to that in just a minute.

But firstly you should understand that the most portable saws will be lightweight and easy to transport, but also leaving something to be desired in terms of power, precision, and general usability.

On the opposite end of the spectrum, the most powerful and precise versions will be the most difficult to move around.

These differences are stark! The lightest and most portable options could be carried around in one hand, while the heaviest and least portable could require several people and tools just to move around your shop.

Basically there’s a wide selection on both ends of the spectrum, and everything in between. But keep the general rule in mind: The more portable it is, the less functional and powerful it will be, and vice versa.

Within this category there are a fews sub-types of saws, as I mentioned above. You’ll hear different definitions of this online – but basically it comes down to two options: benchtop and jobsite.

These are generally the smallest and lightest table saws you can buy. As the name suggests, they’re designed to sit on a bench, and are mostly designed to cater for light-duty work in a home workshop or garage.

This also means there’s no stand with these saws, so you’ll always need a bench or platform to use them on. The lack of stand makes them really lightweight too, generally no more than 40 or 50 pounds.

The actual table surface on these saws are pretty small, which means the rip capacity is limited. And as mentioned earlier in this article, they’ll generally be less functional than larger and more powerful saws.

Here’s the good news: They’re also the cheapest option. This is because they use cheaper materials (for weight saving) such as plastic or aluminium, and just generally have a more simple design that uses fewer components than full size table saws.

Something else to be aware of is the fences on these small types will be generally a bit finicky to use. They can feel a bit cheap, and don’t exactly inspire confidence in their accuracy.

That’s not necessarily a big deal though.. it’s just one of the tradeoffs you get with a small and cheap saw. Just measure to double check that the fence is positioned correctly, square, and securely fastened in place before starting your cut.

A benchtop table saw will be perfect for the hobbyist woodworker who’s operating in a home garage or workshop.

They’re great if you’re using limited space as they’re so light and small. And they’re also the cheapest way to get one of these tools into the shop.

The small size means they won’t be useful if you’re working with full-size material sheets. And, they’ll also struggle with thick and hard woods.

So if you’re limited on space or money, and only plan to use your table saw for cutting plywood and soft woods, then a benchtop like Dewalt Dwe7480 could be the right choice for you.

These days, many people consider “jobsite” and “contractor” table saws to be the same thing, even some manufacturers use this terminoligy interchangabley. But, actual contracor saws are traditionally stationary saws, and we’ll talk about them later in this article.

As the name “jobsite” suggests – these are designed for life on the job. They’re as big step up from bench top saws, and will also be more suitable than a bench top saw for some home woodworkers.

They’re still portable, and also generally come with some sort of foldable stand and often wheels to make transport easier.

That being said, they’re heavier than benchtop saws. They’re designed to take a beating on the job, and also to produce accurate results that are demanded by most contractors.

Other features like dust collection ports and riving knives are considered standard – these are things you’ll sometimes find are missing on the cheaper bench top saws.

While being more powerful, these jobsite saws also have bigger rip capacities, better and more reliable fences, and are just generally more functional. For example, take a look at our Bosch 4100-09 review.

These saws are aimed squarely at professionals. They’re a good mix of portablilty and functionality – certainly more powerful and functional than a benchtop saw, but not as great as a stationary table saw.

With this, they’re also heavier which makes them less portable. This is a classic tradeoff – you get more functionality at the cost of the tool being bulkier and less portable.

They have the power and functionality demanded by professionals on the jobsite, and they’re the clear choice for these people. Heavier stationary options can’t be brought to the site.. and benchtop saws probably won’t deliver the required results as effectively.

Some home woodworkers might also choose a jobsite saw for the extra power and functionality, while still retaining that touch of portability. Having more power, better features such as dust collection ports and a more useful fence, and generally being more useful might be enough to sway some home woodworkers who aren’t ready to go for a full on stationary version.

Moving on to saws that are designed to stay in one place – now we’re getting into the serious end of these incredible tools!

In this category we have 3 sub-types of saws. These are contractor saws, hybrid saws, and cabinet saws. 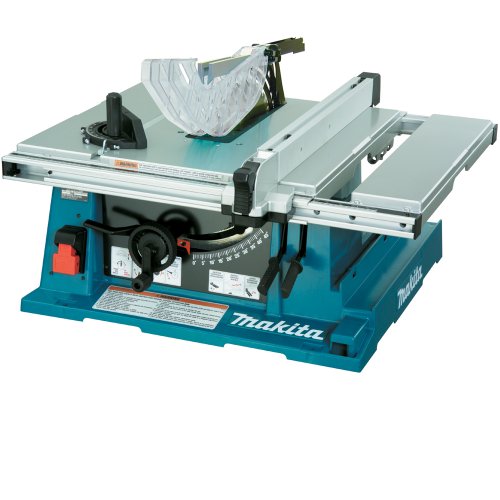 These are the next step up from a jobsite table saw. As I mentioned above, the names “contract saw” and “jobsite saw” are often used interchangably – but they’re very different tools.

These contractor saws are also aimed at professionals, and were initially designed as a smaller and cheaper alternative to the larger cabinet saws.

In comparison to the portable saws we’ve just been looking at, these contractor table saws are beasts.

They have larger table areas, and also feature powerful and large belt driven motors. They can weight up to 300 pounds and so fall clearly in the “not portable” category.

Because portability is not the aim of these saws they’re very robust and functional. The actual table area is much larger to provide a huge rip capacity. The fence will generally be much more reliable and easy to use – and the result of all this is reliable professional-grade cuts.

These would not be out of place in the workshop of any professional woodworker. They’re also a great choice for home woodworkers who want to work on more serious projects. 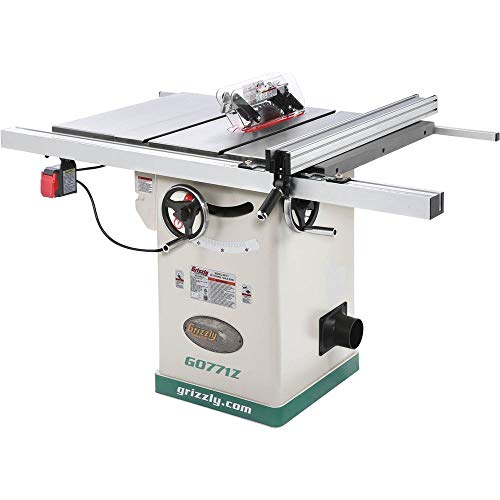 We won’t spend too long talking about hybrid saws, as their features are mostly covered when talking about contractor saws and cabinet saws.

Cabinet table saws are full-sized industrial beasts (as we’ll get to in just a moment), and hybrid saws were designed to fill a gap between contractor and cabinet saws.

Hybrid table saws are quite similar to contractor saws, and have a comparable price – which, by the way, is much cheaper than cabinet saws.

They provide tons of power, functionality, and usability so you can get the best of both worlds – the reasonable pricing of a contract saw combined with some of the power and function of a full on cabinet saw. Good example of a hybrid table saw is the Shop Fox W1819.

Cabinet saws are the mac-daddy of all table saws. They’re called “cabinet” saws because the body is enclosed in a cabinet (hybrid saws also often have a fully closed cabinet, too).

However aside from that, cabinet saws are a straight upgrade in every way – with the exception of portablity, of course.

These saws are very heavy, robust, and precise – they often weigh over 500 pounds.

They generally feature monstrous motors which run on 240V and produce between 3 and 5hp – much more powerful than the typical 1-3hp motors in the table saws we’ve already discussed.

In terms of table saws, this is as good as it gets. The fences and miter gauges are very easy to use – and importantly, also very accurate. You can rely on them, and won’t need to be constantly re-measuring and adjusting. Their tables are huge and have large extensions.

Cabinet saws can pretty much cut whatever you throw at them – hardwoods, pressured treated or thick lumber, and most other material sheets of almost any size.

Cabinet saws go a long way beyond what most hobbyist woodworkers will need.. they’re most useful for factories, professional contractors, schools, and workshops that demand the most functionality and highes quality results.

These are large and bulky, so you’ll need some decent space to house them. Weighing up to and over 500 pounds means they’re very awkard to move around.. definitely the least portable table saws you can find anywhere. So when they’re set up, they’ll probably be staying put for quite some time.

Did I mention that cabinet saws have a crazy long lifespan? They’ll probably outlive the owner – and maybe even the next generation too.

In summary, cabinet saws are best suited for the most serious and demanding professional woodworkers or factories.

There really isn’t much more that can be said on the topic of different types of table saws – hopefully you’ve found this guide comprehensive enough to form a full understanding of the options that are out there when buying a table saw.

If you’re wanting to buy a table saw the next step would be to think about what you’ll be using it for, and also things like your budget, space availability, need for portability or functionality, and so on.

Once all that’s decided, you should be able to come up with a pretty good decision of which type of table saw is right for you.

Then you can focus on specific brands and models of that type, and ultimately come to a solid decision.

If you’re a new woodworker and all this seems a bit overwhelming or you’re not sure what you’ll need from your table saw, then I might suggest that you go for a bench top saw – they’re the cheapest of the lot and are definitely good enough to get you started. If you want to upgrade in the future it won’t be a big deal – plus, you could also resell your benchtop saw to help offset the price of an upgrade.