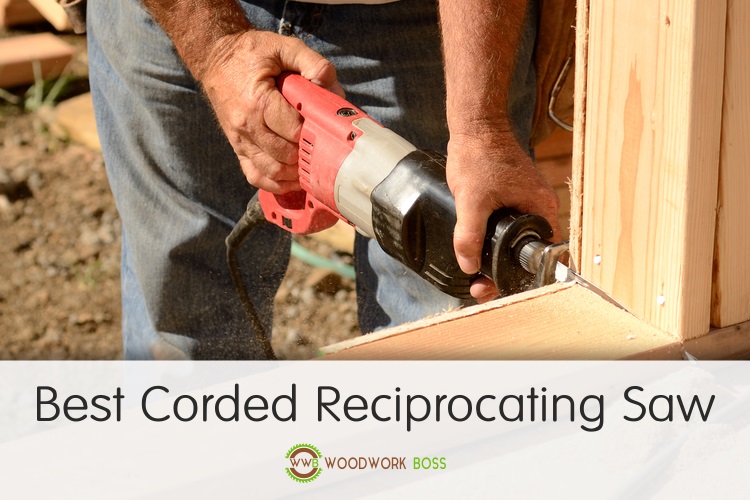 While somewhat dated in today’s battery-powered world, corded tools still have a place in your toolbox. That includes saws, which sent us on a journey to find the best corded reciprocating saw.

Even though they aren’t as popular as they once were, corded saws are not hard to find. That means you have a lot of options on the table, especially considering reciprocating saws have more corded models available than other styles.

While it may be tempted to go all-out and choose a reciprocating saw with the biggest motor, it may be overkill. There is no need to overdo it, especially if you’re shopping on a tight budget.

In the reciprocating saw world, power is important, but all saws of this nature are going to be strong out of the box. They are made to cut through things other tools cannot, so they instantly have an edge. That said, the amperage ranges between 5 and 15 amps in most cases.

If you want something light and don’t plan on tearing down any houses, you can get by with something between 5 and 10 amps. Go higher if you truly want a workhorse or need a saw for metal and other tough materials.

This is a fairly common feature on reciprocating saws and a handy one as well. A variable speed system allows you to adjust the speed to suit the material your cutting. It also gives you a chance to start slow and get set on your cut line before going full power.

Changing out blades used to be a major ordeal. You would have to stop for a minute or longer in some cases to get out a key, which thankfully gave the blade time to cool most of the time.

Modern reciprocating saws have keyless clamp systems which allow you to swap blades in seconds. Seriously, you just need to lift a lever, pull out the old blade, and pop in a new one. It is a feature you will want to look for.

The one drawback to even the best corded reciprocating saw would be the fact it vibrates. All saws of this nature do, but it’s something that can throw you off if you have never used one before.

While manufacturers can’t take the vibration out of the saw, they can damper it. If you will work with the tool for extended periods of time, look for a saw with ample padding on the grip. Other “fatigue-reducing” features may come into play as well, but be wary of marketing terms compared to actual flagship features.

While vibration is a drawback, weight doesn’t have to be one.

The larger the motor, the heavier the saw. This is something you can’t get around although manufacturers can solve the weight equation by using different materials in the build. Corded reciprocating saws are also lighter than many battery-powered models. A cord weighs far less than a 20-volt battery.

Either way, these tools aren’t light so you can expect one to weight between 8 to 10 pounds on average. By comparison, that’s almost twice the weight of a good cordless drill or impact wrench. 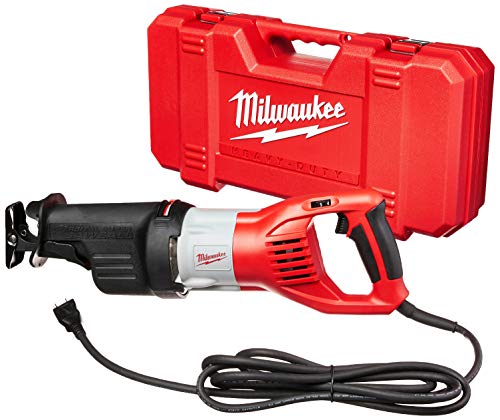 Dubbed a Super Sawzall, the Milwaukee 6538-21 is a mean machine. It’s one of the most powerful saws on the market, and an absolute lock for the top spot in our best corded reciprocating saw list.

A 15 amp motor powers this saw which is top of the line and packed full of useful tech. That includes overload protection to keep the motor running strong even under extreme duress. It also has tech built in that ensures you have a steady stream of power at all times regardless of the load.

You’ll get one on the Milwaukee 6538-21. It also has a unique gear protecting clutch that helps to extend the life of the tool. It does this by “dampening” impacts, including those caused by the saw becoming bound or locked up. Needless to say, it is highly unlikely you’ll need to take this one to the repair shop.

We’re pleased to say this saw is easy to use as well. The speed dial is a lifesaver, and we love the counter-balancing system in the 6538-21. It keeps vibrations to a minimum which keeps your arms fresh on those long days.

While we love everything about this saw, there are a few drawbacks.

It’s heavy, tipping the scales at around 13 pounds and it is also not cheap. It’s a professional heavy-duty model, but you’re getting what you pay for which is top-tier quality in this case. You’ll also get a 5-year warranty and a carrying case with the Milwaukee 6538-21. 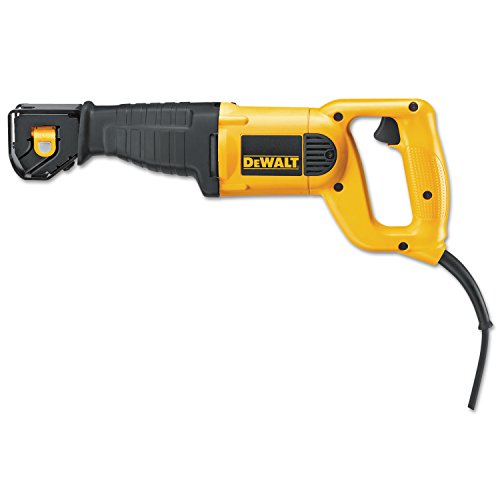 If our top choice is a little too mean for your liking, the DeWalt DWE304 may be right up your alley. This reciprocating saw is an amazing option as well, but it is 5 pounds lighter and half the price.

DeWalt is known for making quality tools, and the DWE304 is certainly no exception. It sports a powerful 10 amp motor with a variable speed control system that also extends to the trigger.

You can zip right through thick 2’ x 4’s or metal pipes with no problem, and changing blades will take seconds, not minutes. That’s because this saw has a 4-position blade clamp which allows you to quickly change blades while also keeping them secure.

The speed on this saw is rated at between 0 – 2,800 strokes per minute and it has a 1-1/8” stroke length. It also comes with the company’s warranty which provides 3-years out of the box. While not shown, you will get a case with the DeWalt DWE304 as well.

You also can check our guide for DeWalt DCS367b.

The SKIL 9216-01 may carry the budget moniker in our guide to the best corded reciprocating saws, but don’t let that name fool you. It has plenty of oomph, and certainly won’t break the bank.

We’re going to start with the build quality on this one. It is not going to measure up to our top choices in that department. It’s plastic, and aside from some rubber on the grip, the design is nothing to write home about.

While it may not win any beauty contests, the SKIL 9216-01 performs admirably thanks to a 9.0 amp motor and a solid pivoting foot. The gear housing is metal as well, and there is a power light to let you know when this one is jacked into the wall socket.

There aren’t many standout features on the SKIL 9216-01, but it gets the job done and can slice through pipe or wood just like our top two choices. It may not last quite as long although you will get a 1-year warranty along with a 30-day guarantee.

It’s hard to choose between cordless and corded, but the choice is simpler when dealing with reciprocating saws.

With other tools, power may not be an issue. For these beasts, you need plenty of it and the best way to get it is by tethering yourself to a socket. If you’ve settled on a saw, be sure to give our reciprocating saw blade list a look as it features some of the top blades around.