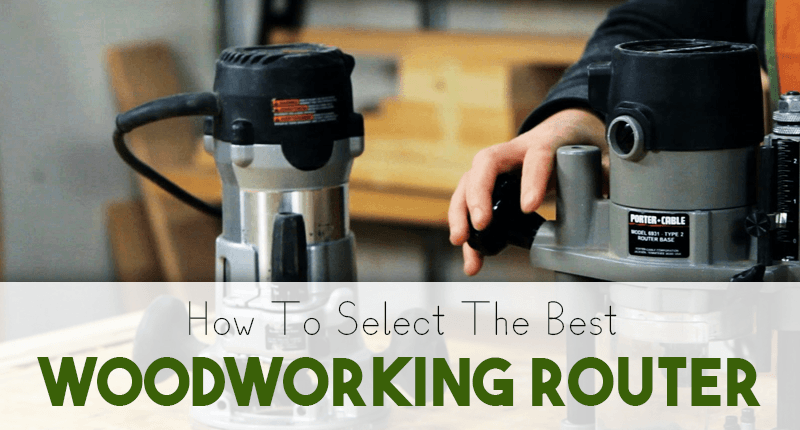 How To Select The Best Woodworking Router

If I could have only one power tool, along with my cordless drill, that one power tool would be a router. Now that’s a bold statement in that I didn’t choose a circular saw or a table saw. Nope, I would choose the router. Why?

Well, it is one of the most versatile tools available. Originally designed to speed up the manufacturing of molding and other shaped parts, the router was produced in 1905 by the Kelly Electric Machine Company. Although designed for producing shaped edges, the router lends itself to SO much more.

The router is basically a hand held version of a spindle shaper, a large cabinet machine which costs a bunch of money. Not the router. Router’s can be purchased for less than $100.00. Of course, you get what you pay for.

Now, let’s look at what routers can do and some routers that would be a great addition to your shop.

Uses For A Woodworking Router

As I mentioned earlier, the router was designed to speed up making shaped edges and parts, but savvy woodworkers have learned to do so much more than that.

With the vast option of cutting bits, the router can make an infinite number of routed or shaped edges. Want a decorative edge on a table top? Grab a round over or thumb edge bit and routed it out. Picture frames are also easily made using decorative router bits.

Ripping? Yes, ripping. One of the reasons I’ll choose a router over a circular or table saw when I can’t have both. Although not as quick, with a straight edge guiding the router one can rip boards to width.

Yep, cross cutting can also be done with the right bit and a guide to ensure a straight cut.

Dados are a breeze when using a router. Once again a guide is used to insure straight cuts.

Using either a ball-bearing rabbet bit, or a straight cutting bid and an edge guide, rabbets are quick and easy to make.

Once again, with a straight cutting bit and a guide, straight and clean grooves can easily be cut.

With a dovetail bit and the right dovetail jig blind and open dovetails are done much faster than cutting by hand.

Many counter tops are still covered with laminate and the tool to trim it to the right size is the router, utilizing a laminate bit.

Wooden projects to be hung on the wall need some sort of hanger. Many folks buy metal hangers and use those, but if you want a shadow box to fit flush and secure against the wall, then cutting hanging slots in the back is the way to go.

With the right bit and guides, one can cut both mortises and tenons. Both blind and through mortise and tenon joints are possible.

With a surfacing jig and a straight cutting bit one can actually surface wood to thinner thicknesses. Although not as fast as using a surfacer this technique is great for the woodworker that has neither the space or cash for a surfacer.

Many projects call for raised panel doors. The router is a great way to cut raised panels, as well as rails and stiles for completing the door.

When several identical parts are needed, a pattern can be produced. By attaching the pattern to pieces of wood, duplicate parts can be produced with a ball-bearing guided cutter.

With a circle guide affixed to the router it can be used to cut out round speaker holes in speaker boxes, or cut circular shaped pieces, such as a round stool seat.

Now, that’s just some of the things that can be done with a router. There’s even more advanced uses that could be covered, but those will be saved for another time.

What To Consider When Buying Woodworking Routers

When figuring out which router is the best, there are several factors you should keep in mind. Here’s a breakdown to the most crucial characteristics to watch out for when selecting the best woodworking router for you.

5 Factors That Make A Router A Good One

Cost is always something to consider when buying a power tool, but the cheaper the tool, the more likely it is to not hold up. When you can, pay for a known brand, and buy a bit more than you think you’ll need.

Motors are the backbone of a router, the smaller the motor the harder it will work when cutting oak, walnut, and other dense woods. Buy as much horsepower as you can afford.

The body and frame of most routers are the same as most modern power tools, polymer and metal components. The more metal the router has, the tougher it will be.

Collets hold the bits and a router that has both 1/2” and 1/4” will be much more versatile that one that has only one of the two. You’ll be better off buying a router with both.

Additional features and accessories make a purchase that much better. Although not totally necessary, a variable-speed motor is a plus for adjusting the speed to bit sizes. Another great add on is a carry/storage case, as are guides for straight cuts and such.

Plunge cuts can be done with a standard router, but a plunge router makes them a bit easier to accomplish.

Along with the two styles of routers, there are also two types of router. Larger production routers, which includes standard and plunge routers, and smaller trim routers. Trim routers are smaller and lighter, with less power and are usually used for trimming laminate, but these are also great routers for lighter work, when a larger router would be over kill.

In addition to the types and styles noted above, routers are also available with single-speed and variable-speed motors. On top of that, there are cordless trim routers.

Reviews Of The Best Woodworking Routers

Now that you know all about the different types of routers and what you can use a woodworking router for, here are the top 3 woodworking routers available. Take a deeper look of each of these and you’ll surely find the most suitable one for you. 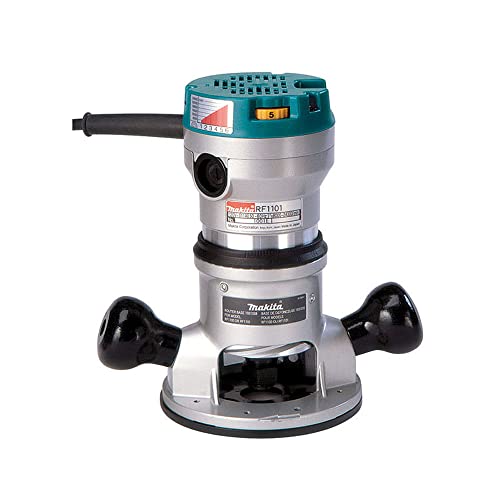 Makita is a well-known company that produces quality, long-lasting power tools, and the RF1101 is another great addition to the woodworker’s arsenal.

This is the least expensive of the three routers, and rightfully so, since it does not include a plunge base or other accessories.

The base is a standard, non-plunge base.

As per most modern power tools the body and frame is of the usual polymer and metal construction. The polymer is limited to the handles and the motor cap.

Other than the multiple collets and wrenches, no other accessories are included in the kit.

Makita’s offering is another great option for any woodworker’s shop and is well within reach of any woodworker. For those that want a great router at the lesser cost, this is the right choice. 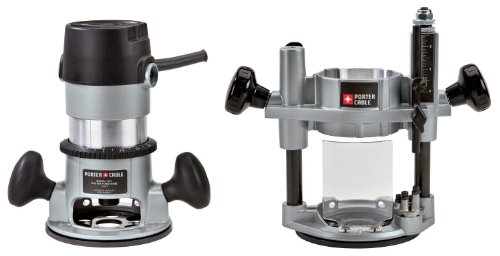 Porter-Cable has been manufacturing power tools for years, and I know first hand how they last. I’ve used a Porter-Cable router for years and it’s not a tool that will let you down.

The Porter-Cable kit is the mid-priced of the three offerings, combining a good price with high functionality.

This kit includes both a fixed (standard) base and a plunge base, offering the best of both worlds. The fixed base is great when mounting this router in a router table, or when non-plunge work is to be done. The plunge base provides for greater versatility.

As per most modern power tools the body and frame is of the usual polymer and metal construction. Porter-Cable uses more metal than most with the base, handles, and end cap made from polymer.

Collet sizes include 1/2” and 1/4”, which allows for the use of a wide variety of bits.

In addition to the multiple collets and wrenches, the only accessory is the plunge base.

Although single-speed, Porter-Cable’s 690LR is a great router for any shop. The plunge base will allow for greater versatility. This should be a long lasting addition to any woodworking shop and will serve well for years. 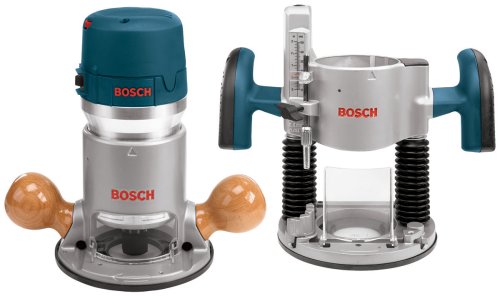 Bosch is also well know for quality power tools and this router is no exception. Another great option, with standard and plunge bases, this router will serve well for years to come.

The motor is a 12 amp motor that produces a 2.5 hp. It also features variable-speed so that one can dial down for larger bits and ramp it up for the smaller ones.

This kit also includes both a fixed (standard) base and a plunge base, as does the Porter-Cable kit.

As per most modern power tools the body and frame is of the usual polymer and metal construction.

The Bosch is another great option, with both standard and plunge bases and being made by a company that is known for quality power tools. With all that comes with this kit, this kit is the best bang for the buck.