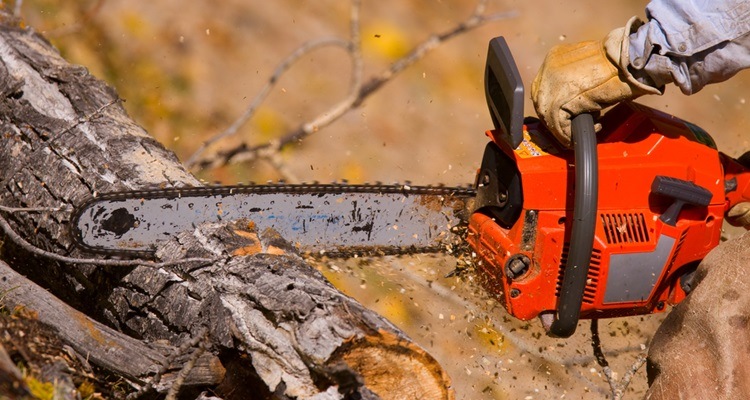 All types of powered saws (and power tools in general) are extremely dangerous, but chainsaws are on another level of danger altogether…

Most other types of saws are in a fixed position, and you move material through them – or at the very least you can at least set up your material in a stable position, plan your cut, and go through with it.

Chainsaws are different though.

They’re designed to be moved around quite freely, as that’s what’s needed for dealing with tree cutting. Also, no two jobs are the same… Different angles, types and thicknesses of branches, obstacles, and so on.

All of these variables combined with the inherent danger of a chainsaw, means that a quick safety lesson is crucial for any chainsaw user.

In this article we’ll cover:

This should give you a great foundational understand of what it takes to be safe while using your chainsaw – and then rest will come from practice and experience.

Just like if you were going for a hike or doing something else alone away from built up areas, it’s best to let someone know where you’ll be, always have a phone with you, and try to keep a vehicle as nearby as possible.

In case of injury, you’ll want to be able to call someone for help. And if you can’t manage that, you certainly want to have told someone where you’ve gone so the alarm can be raised later if you don’t return.

The nearby vehicle is of course so that you can get yourself out of there to find help, if needed.

With chainsaws being so dangerous, there’s a ton of different safety gear that’s been designed to help keep you safe.

Now, if you’re just trimming trees in your backyard you probably don’t need a whole getup – So, we’ll just go through everything that’s available and you can choose what’s best for your current needs.

Keep in mind that the most common injury from a chainsaw is a laceration – that is, a break of the skin. These can range from small cuts to devastating wounds, and can occur almost anywhere on your body since a chainsaw is so free moving.

With that said, most of this safety gear is designed to protect you against lacerations:

With all of this stuff, you’d be fairly well protected from head to toe – although that doesn’t mean you’re totally resistant to the potential damage of a chainsaw.

You’ve still got to keep other safety tips in mind, and always be cautious when handling such a dangerous piece of kit.

Of course, the tool itself also has some very important built-in safety features, and ps – if you’re choosing the best chainsaw for you to buy, you’ll want to make sure it has most of these.

Kickbacks tend to happen pretty frequently when using a chainsaw, and they’re one of the biggest threats to your safety (more on that below).

This is very important, because kickbacks happen so fast that you won’t have time to react and let go of the power trigger before it’s too late.

Again, we’ll talk more about kickback at the end of this article.

This is usually near the power trigger, and it’s simply an extra button you need to press down while using the saw.

Without being pressed down, it’ll lock the trigger in place to prevent accidental revving of the saw.

Designed to catch the chain in the case of a chain break or derailment.

Again in the case of a chain break or derailment, this protects your right hand.

This is usually a very easy-to-access button which still instantly stop the saw in case of an emergency.

First things first, you’ll want to plan your cut – ask yourself these questions:

Running through this checklist is a good habit, and should help you identify any particular dangers for this cut.

You’ll also want to check your chainsaw before using it:

Being always vigilant and thinking about these things is what will keep you safe each time you use a chainsaw – remember, it takes only one lapse of concentration to make for a potentially devastating accident.

And finally, we have some general tips about actually using the chainsaw…

Firstly, you’ll want to make sure you’ve got a firm grip with both hands. Pay special attention to your left hand on the front handle – Grip the handle fully by wrapping your fingers and thumb around it. You’re controlling a saw, not leisurely holding a steering wheel. This is very important, because without a proper grip you won’t have good control over the saw – especially if it makes a sudden movement during a kickback or pinch.

Beyond this, make sure you have some good general balance.

Make sure the saw feels comfortable in your hands, that it’s well balanced and you’re in control of it.

Also be sure that you yourself are balanced. Keep your weight firmly over both feet with a good stance, and have your knees slightly bent.

This is important for controlling the saw, and especially so in the case of a kickback or pinch. The very last thing you want is to fall totally off balance with a spinning chainsaw in your hands.

Finally, make sure you’ve ran through the mental checklists mentioned above and planned your cut. Make sure there’s no one else near you, and that everything is ready to go.

These have been mentioned a few times in this article, and they’re a major safety concern when using chainsaw.

Such a concern in fact, that they deserve their own little section.

There’s a lot to discuss though, and doing so in a visual format is the best option. So, checkout this great video.

This might all seem like a long and arduous process – and indeed the first few times you do it, it’ll seem that way.

But with enough practice and experience you’ll be running through all this stuff automatically as if it were second nature – It’s just about building the right habits for safe chainsaw use.

These are incredibly useful tools, but you’ve got to treat them with the respect they deserve!