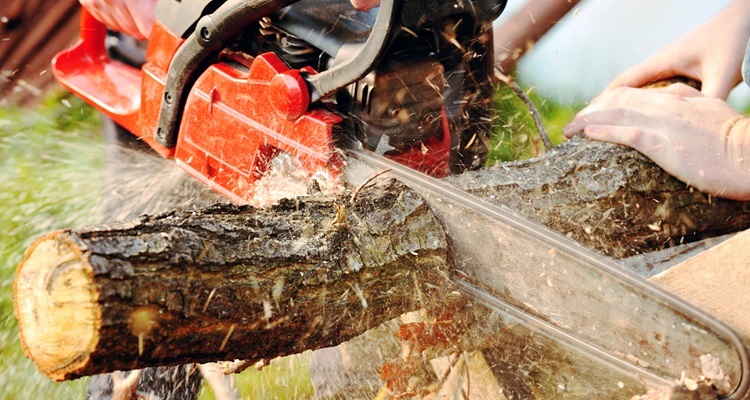 How To Use A Chainsaw

Even if you’re not a serial killer (you’ve see “The Texas Chain Saw Massacre” right?)…

Chainsaws can be very dangerous, and are a threat to yourself and those around you.

It’s important that you know firstly what chainsaws can reasonably be used for, and then also how to use a chainsaw effectively and safely.

And that’s exactly what we’ll cover in this article – after reading, you’ll be on the road to chainsaw mastery.

What a chainsaw can be used for

Generally, there’s 4 different types of jobs you can tackle with a chainsaw:

This article is moreso focused on how to use a chainsaw rather than what it can be used for, so we’ll keep this brief…

This is what you do to maintain your trees – it’s simply cutting off small or medium sized wayward limbs on your trees.

As a non-professional user, you probably don’t want to tackle huge limbs, as that’s where things can start to get really dangerous.

I would also suggest that you don’t try making cuts at elevations up in the trees – leave that stuff to the professionals.

Limbing is removing branches from a downed tree, and it’s pretty straight forward…

Simply cut the branches off while keeping the cut off point as close to the trunk as possible. Easy peasy.

This is when you cut the trunk of a downed tree to length.

Downed trees are difficult to manage, but cutting them into smaller chunks makes things much easier. Again, this is pretty straight forward.

Chopping a tree down – An entirely more complex task than what we’ve mentioned so far, and should not be undertaken lightly!

This is really dangerous, obviously…

It’s beyond the scope of this article to try and explain it in any sort of detail – but, here’s an article which details fully how to fell a tree.

3 Steps How To Use A Chainsaw Safely

OK, let’s get to the good stuff…

Use these 3 steps, and you’ll be a safe and effective woodsman in no time:

There’s just a few basic things you should check before each and every time you fire up a chainsaw.

These are important for not only safety but also the health of your saw.

Firstly, do a check over of the saw in general – make sure there’s nothing loose or broken (that could have happened during storage or transport).

Check the controls, and make sure the handles are nice and steady.

You’ll also want to check the sharpness and tension on the blade. There’s unlikely to be anything amiss about this, but it’s a good habit to form.

This last point may sound obvious – but make sure your chainsaw is topped up with fuel. This is especially true if you’ve got to trek a bit before making your cut and won’t have any spare fuel with you.

Trekking back to your truck mid-job to refuel would suck, right?

Also, check your oil levels. Running out of fuel when using the chainsaw is fine, you just gotta refuel… But running out of oil is an entirely different story.

If you don’t notice and keep using your saw, you can cause serious damage and make the saw pretty much unusable beyond a certain point.

Like checking the sharpness and tension, checking fuel and oil levels before starting is just a great habit.

There’s two ways to do this – The first is with the saw on the ground, and the second is a much more unsettling way…

The second way is to have the saw in your hands, but rest it between your legs.

While having a chainsaw between your legs sounds like an awful idea, it’s actually not a bad position to start it up.

Plus, the chain won’t start spinning on startup anyway.. So really, it’s not that bad.

Either way, you’ll want to ensure the chain brake is engaged, the choke is closed, and start switch is on.

Then fire it up, and you should be good to go. Give the trigger a little tap to make sure it’s all ready, and then leave it to idle.

You’ll want to be sure of what you’re going to cut, before you start cutting.

We’ve got a breakdown above of the basic uses for chainsaws, so hopefully you have a pretty good idea of the task you’re about to do.

When using the saw, make sure you’ve got good footing and balance throughout the cut. That probably goes without saying – but it’s good to settle yourself firmly on your feet before starting.

Also check around your cutting area to make sure there’s no tripping hazards. The last thing you want is to be falling over with a running chainsaw purring away in your hands – Yikes!

You’ll also want to make sure that you’ve got a firm grip on the saw – especially with that front hand. If the saw kicks or pinches during your cut, having this firm grip can help keep you in control.

Kickbacks and pinches are two of the most dangerous things that can happen when using a chainsaw.

Not only that, but kickbacks tend to happen pretty regularly during use… So it’s important that you’re prepared for them.

A kickback is when the saw snags in something it can’t cut – a rough piece of the trunk or branch you’re cutting through, or whatever.

It can also happen when the bar gets pinched by two halves of a cut collapsing on the saw while you’re part of the way through your cut.

A dull blade might also cause your saw to snag and kickback – that’s one of the reasons to keep it sharp, and also to check for sharpness each time before using your saw.

The saw being stopped by something it can’t cut causes the force to be transferred back at you, and the saw kicks back towards you or out away from whatever you’re cutting in some other direction.

To help avoid these, never make cuts using the outer corners of the bar- that’s when these are most likely to occur, so keep your cutting to the middle of the bar whenever possible.

When a kickback does occur, the chain brake should stop the chain running as it hits your hand and help to protect you.

If you’re prepared for these, they should be pretty easy to manage. Just always plan your cuts, be aware of what you’re doing, and be prepared for when they’re likely to happen.

Chainsaws are likely one of the most dangerous tools you can use – and a lot of this is because they’re so unstationary.

They’re not like table saws or miter saws which have a fixed position for making cuts… Chainsaws go out in the world with you, and you can use them in a bunch of different ways – No two cuts are ever the same.

Follow the steps in this guide, and with a little practice you should be cutting like a pro in no time.

Start off with some simple and manageable tasks, and build up to more complex stuff. Always be careful, and keep safe!