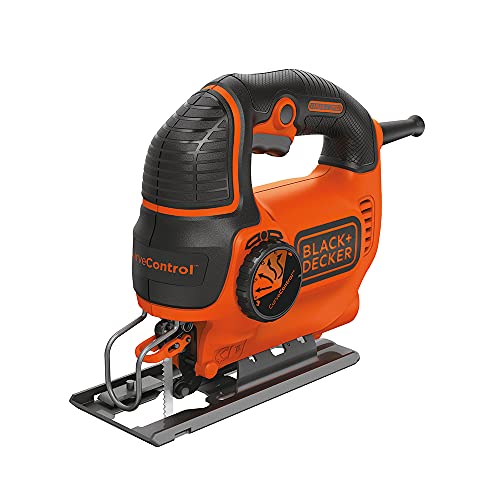 Black and Decker make a wide range of tools that cover all price points. That includes affordable options like the Black and Decker BDEJS600C, which is a budget-friendly jig saw.

Some consumers may quake in their boots when it comes to low-cost power tools, but have no fear with B & D. In our Black and Decker BDEJS600C review, this model turned out to be a pleasant surprise and a tool that would be a great addition to your arsenal.

Who is the Black and Decker BDEJS600C made for?

Simply put, the BDEJS600C is geared towards homeowners. It’s a tool that you can use on a wide variety of projects around your home or even in the shop as long as you don’t push it too hard. The price point makes it accessible to everyone as well.

At only 5.0 Amps, the Black and Decker BDEJS600C is not necessarily the definition of power. It’s respectable and can handle what it was built for; it’s just not an “industrial” style saw.

It does have a variable speed trigger, however, which is something we always try to look for on quality jig saws. This one can hit speeds up to 3,000 strokes per minute, which is going to be more than sufficient for light to medium-duty usage.

A jig saw may be hard to master, but they are not particularly difficult to use.

The Black and Decker BDEJS600C will not cause you any issues out of the box, and it certainly won’t strain your arm during extended use. It’s lightweight at only 4.6 pounds, which is quite impressive. The weight may also causes some issue, but we will address those soon enough.

We like the handle and overall grip on this one as well, but the keyless blade clamp is the real draw for this department. This allows you to switch blades in seconds, something that can take several minutes with other styles of jig saws.

The company improved the wire guard on this model which helps with accuracy, but it is still a little underwhelming, to put it mildly. It will get the job done, however.

If you haven’t been blown away by the Black and Decker BDEJS600C thus far, the additional features may change your mind.

First up is something called curve control. While it’s handy, don’t let the name fool you. Curve control is a marketing term that refers to the orbit, which you can set as it has 4-positions. The shoe on this model is adjustable as well so you can make 45-degree bevel cuts with ease.

Like any tool with a blade, a jig saw can cause quite the mess. You won’t have to worry about that with the Black and Decker BDEJS600C as it has a built-in dust blower. It’s a feature that is becoming more common, but still a rarity in the budget range.

Whereas some saws stick you with one style of blade, Black and Decker didn’t do that with this model. It can accept both U and T shank blades, which is a huge plus.

What’s in the box?

In the box, you will find a blade and an instruction manual. Yup, that’s all you will get with the Black and Decker BDEJS600C as the company had to cut corners somewhere in order to keep the price down. Needless to say, you will want to make room in your tool bag or kit for this one. Thankfully, it will not take up much space.

On the flipside, you have a blade to get you started although we highly advise you to pick up a few extras. Included blades are generally not that great, and it may not be the type of blade you need. It’s not specified, but we’re guessing the included blade is for wood or general purpose.

While there is a lot we like about this Black and Decker jigsaw, there are also a few serious drawbacks depending on how you’ll use it.

The first would be vibration as some users have reported difficulty keeping this one on track compared to similar models. That could be due in part to the weight or the material being cut, so take that as you will. You experience may differ from someone else’s.

We also did not particularly care for the trigger. It works and isn’t uncomfortable or too springy, but there is no guard in place. Again, it’s not something you have to have, but it is a safety feature found on more expensive jig saws.

The cord feels pretty cheap on this model as well. It’s not going to fall apart although we would hesitate to call it durable. If you have a habit of picking up corded tools by their cords, you will want to break that habit before buying the BDEJS600C.

You also can check some of our cordless jigsaw models.

If you can get around a few minor factors and that cord, we think you will appreciate what the Black and Decker BDEJS600C brings to the table.

In our Black and Decker BDEJS600C review, we found it had plenty of pop, and while it’s lighter than we’d like, it will make short work of anything around your house. Just don’t bring it on the job site. We also dig the dial on the side which makes adjustments simple.

As mentioned, you won’t get much out of the box with this one. If you want something more, there is an additional model with 24 blades which to get you rolling right away.