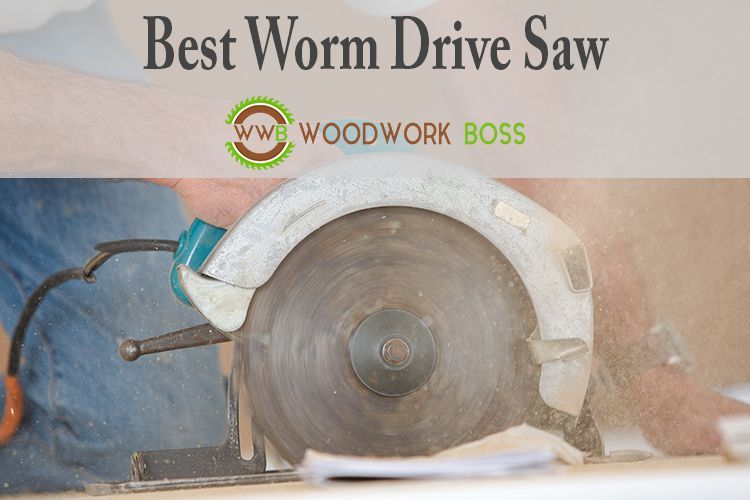 A standard circular saw can only take you so far…

Don’t get me wrong, they’re very capable tools and useful for a huge range of tasks.

All of this is especially true if you’re a professional, although it also applies to serious hobbyists or homeowners.

And that’s where the worm drive circular saw comes in – The big brother of the standard circular saw, designed to give you some extra “oomph”.

To help you choose the best worm drive saw, let’s first discuss the differences between these and standard circular saws, and then we’ll move on to some product recommendations. If you want to choose something little more standard, don’t forget to read our guide about choosing the best circular saw for your needs.

As mentioned during the introduction, worm drive saws are an upgrade from standard circular saws.

There are a few main differences:

A worm drive saw tends to be more powerful than a standard, and also brings more torque to the table.

This is because of how the saws are designed – “worm drive” refers to the positioning of the motor in relation to the blade.

The motor is mounted behind the blade, and this means power delivery to the blade is much more efficient. Basically – because of the mechanical design of a worm drive saw, it can deliver more power to the blade and therefore has greater cutting capability than a standard circular saw, not to even mention cordless circular saws or mini circular saws.

Designed to take a beating

These saws are generally aimed at professionals.

They’re designed to be used in a workshop, on the job site, or anywhere in between…

Worm drive saws expect to be used hard every day, for a number of different tasks. And they’re ready to withstand a beating from this rough and tumble life.

Not only do these rugged saws stand up to a beating, but they’re designed to be easy to maintain.

Many come with high-grade motors using modern technology which drastically increases both overall lifetime, and time between servicing.

That, combined with the powerful motors, makes for a very capable saw indeed.

They’re designed to be versatile and tackle wood, framing, roofs, dense engineered lumber, plywood, particle board, masonry, metal, and so on.

If you pair a worm drive saw with a specialized blade, there’s a truly massive range of tasks that these saws can handle.

As mentioned previously, these are truly aimed at the busy professional or very serious hobbyist.

With all of this extra power and functionality, are you really surprised to hear that a worm drive saw is heavier than a standard circular saw?

They’re almost always going to be heavier – but, not that much heavier. You’ll generally find them in and around 13-16 lbs.

As more being more expensive – there’s no getting around that one.

Not only do they offer more functionality than the cheaper standard circular saws, but they also cost the manufacturer more to build.

These saws are precision-engineered, and backed by a lot of research and development – and that comes at a cost.

Makita and Dewalt dominate our choices for worm drive saws… And, this makes a lot of sense.

These are two very well known and experienced manufacturers, and it makes sense that they’re the best at building these high-grade tools.

With standard circular saws, you see a lot of cheaper brands. That’s because these are cheaper and easier to build.

But it takes significant resources and experience to build a great worm drive saw. So, it makes sense that Makita and Dewalt are on top. 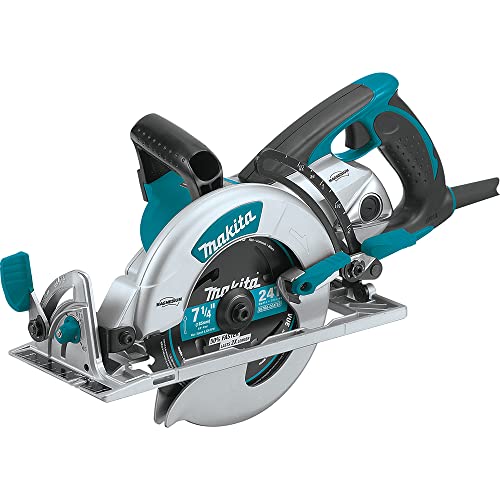 This saw really is just a cut above the rest.

The Dewalt and the other Makita (our number two and three options) are also great worm drive saws, but they’re edged out by the 5377MG.

The very first thing to mention, of course, is the power… 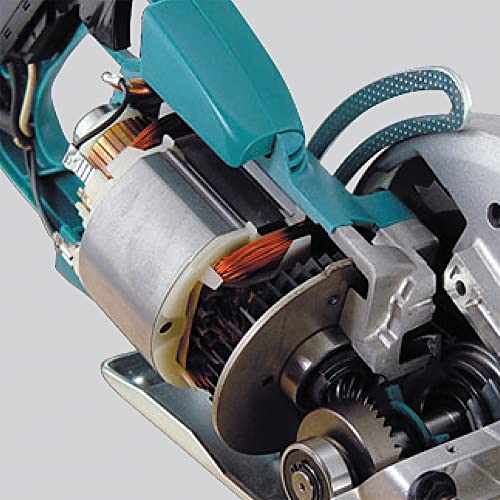 Sporting a 15 amp 4,500 RPM motor, the 5377MG truly delivers on the expectation of worm drive saws to be more powerful than standard circular saws.

The startup torque is pretty incredible – As soon as you engage the blade by pulling the trigger, it fires up to full speed almost instantly.

With that said, the other two options on our list also offer similar power output. Having ample power is pretty much a given when buying a worm drive saw.

The Makita 5377MG is amazingly durable, especially when you consider it’s light weight of only 13.2lbs.

And I don’t just mean durable in terms of being strong and sturdy (which it is).

I also mean that the motor features modern engineering that increases the lifetime greatly, and also increases the time between servicing.

The motor is the main thing which sets the 5377MG apart from the other options on our list.

It features high quality, heat treated, hypoid steel gears – These are a massive upgrade over the standard bronze-alloy gears which are typically found in worm drive saws.

The wear is much less than with traditional bronze-alloy gears, and this lesser wear greatly reduces the lifetime of the saw.

This saw from Makita also features a built-in fan and sealed gear housing to ensure 100% oil surface coating – this again is done with reducing the amount of maintenance required. 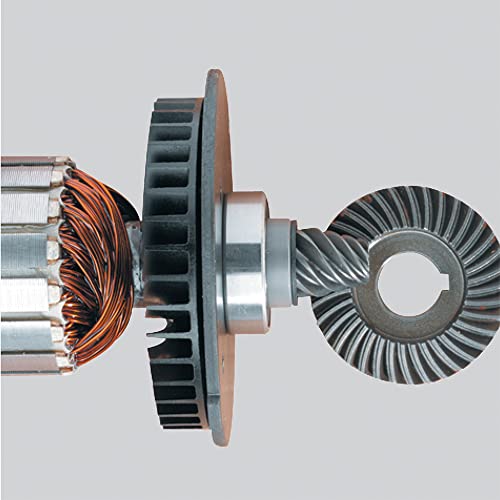 If you’re going to be using a saw for a ton of different tasks with all sorts of materials and cuts, then it had better be easy to make adjusts to the saw as needed.

The Makita does a lot to make your life as easy as possible in this department.

Firstly, of course, it’s designed to tackle a wide range of materials – standard stock, masonry, framing walls, dense woods or panels, and so on.

There’s huge rubberized levers for adjusting cutting depth and bevel angle, and changing the blade is quick and easy.

The Makita 5377MG produces quality cuts for a variety of tasks all day long, makes your life easy while doing it, and stands up to the beating along the way. 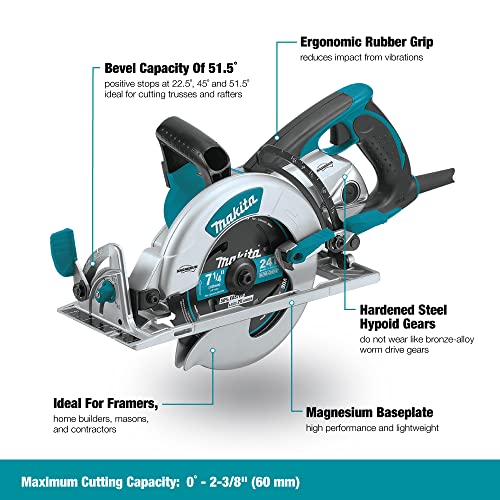 The other two worm drive saws we’ve listed are the Dewalt DWS535 and the Makita 5477NB. 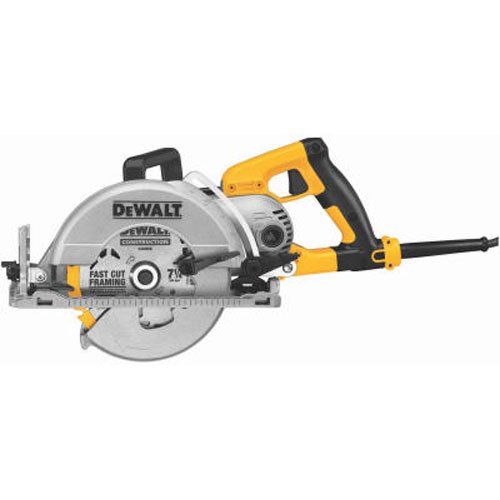 The Dewalt is pretty similar to the 5377MG, but it doesn’t feature the fancy maintenance-reducing technology in the motor.

This means it’ll probably have a short life than the Makita, and require more frequent maintenance.

We chose the Makita over the Dewalt because of the longer lifespan and less maintenance – for a saw that’s going to be used day and out, it’s crucial for it to be reliable. And in that regard, the Makita wins out. However, Dewalt is our favourite for a general standard circular saws with the Dewalt DCS575b model.

The last option on our list is another worm drive saw from Makita – the 5477NB. This is our budget option. 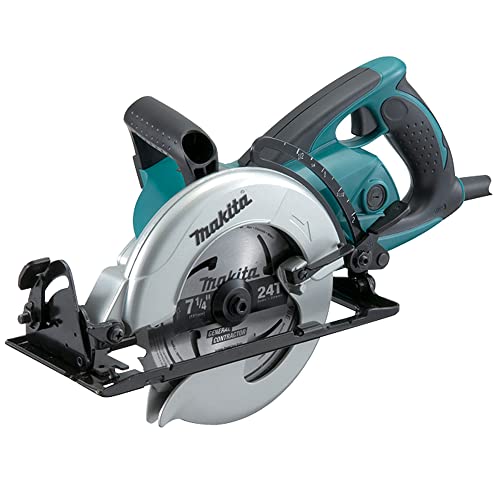 As mentioned, these saws are pretty expensive when compared to a standard circular saw – so “budget” in this sense doesn’t mean you’ll find something that’s actually cheap.

The Makita 5477NB is generally cheaper than the other two options though, so if the price is a concern for you then definitely check it out.

It’s still a fantastic saw, almost as good as the first Makita on our list.

If you need something more capable than a standard circular saw, then a worm drive saw is for you.

They’re extra powerful, more durable, and much more capable than a standard saw. If you’re a professional, you should seriously consider investing in one of these instead of a standard circular saw.

They’ll tackle a wider range of tasks, and make your life a whole lot easier. If you invest in a worm drive saw, you’ll feel it paying you back every time you fire it up!