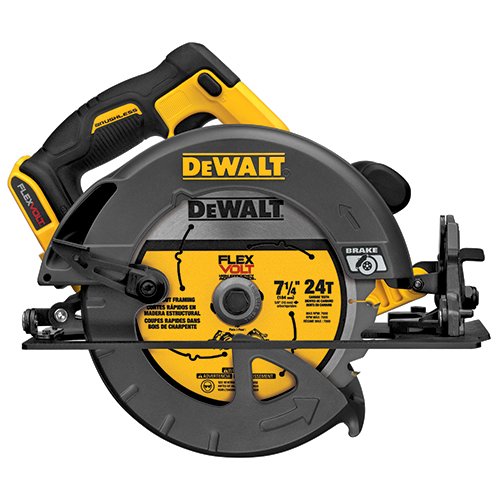 Whether you are a contractor or a homeborn handyman, you know know the value of a great circular saw. Without the right saw, you’ll have a tough time making the cuts you need. A good place to start in your search for the best circular saw is Dewalt. Which is of course why you are looking for a Dewalt DCS575b review, after all!

Now, Dewalt has made a name for itself by making some of the best saws on the market. If you are looking for a tool with tons of cutting power and versatility, then DEWALT DCS575B is the saw for you.

This article will guide you through every aspect of this great saw, so you’ll know exactly what you are getting. Sound good? Alright then, let’s get to it!

Now, as you would expect with any quality tool, there are a lot of advantages to this saw over other saws on the market. There are also, however, some things that could’ve been done a bit better as well.

This is where the rubber meets the road, so to speak. A brushless motor helps to reduce the overall weight of a tool, while also making it run more efficiently.

Even though this saw is powered by an exceptionally powerful 60v battery, you certainly don’t want to waste any of it. The last thing you want to have to do on a job is stop and wait till your battery is recharged!

The DCS575b is operated by Dewalt’s 60v Flexvolt batteries. This is a battery that you are going to love! It provides you with all of the versatility of a cordless tool, with all of the power that you’d come to expect from a corded one.

This is, without a doubt, one of the most comfortable saws on the market today. While you might think that all saws are the same, once you make a few hundred cuts you’ll be able to tell if your comfort was taken into consideration in the design process.

The center of gravity for this saw is right on the trigger, and the handle is angled to allow you to easily grasp it without having to overly twist or turn your wrist.

Ergonomically speaking, this saw is a bit on the heavy side. It weighs in at about 10 lbs. with the battery attached. The one saving grace here is that a circular saw is generally used on top of whatever material you are cutting, which will help to alleviate some of its extra weight.

The electric brake is another great feature. It is an awesome safety feature that will stop the blade the second that you let go of the trigger. This will help to keep you safe if something were to go awry when you are making your cut.

The brake will also help to make sure that you don’t mess up your project either.

Lots of times, an LED on a tool feels like a tacked-on feature that the designers threw on at the last moment to try and make the tool seem more high-tech.

This LED light is anything but a throw-in, however. It’s carefully planned location really helps to make cuts easier to see, even in low light situations. 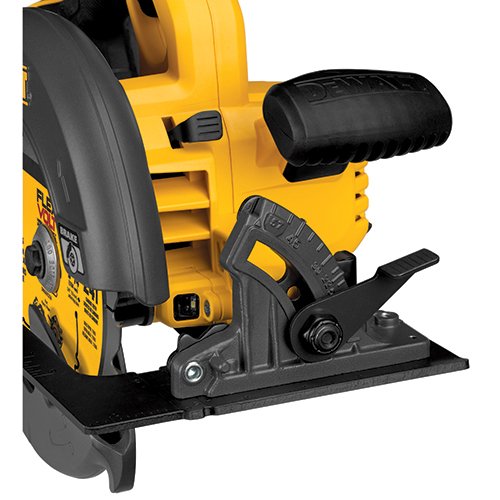 All circular saws have some sort of bevel scale on them somewhere. What sets the scale on the DCS575b apart though is its visibility and legibility. It is super easy to read, which helps to remove all the guesswork from your cuts.

It also has various common presets clearly labeled so that you can set it and get to cutting it!

What You Need to Know

Now that we’ve had a chance to examine all of the cool circular saw features it has to offer, it is the time that we get to the review. Here we’ll take a look at what you can expect from the DCS575b if you choose to purchase one.

Overall, this is an extremely dependable saw. Even if you are cutting all day long, you shouldn’t have any issues with your cuts. If you are cutting 2 x 4’s, you’ll be able to make up to 340 cuts on a single charge!

In all honesty, unless you are building something huge, you won’t need to recharge this saw all that often.

Dewalt is well known for making some rough and tumble tools, and this saw is no exception. Plain and simple, even though it is a cordless circular saw, there is nothing dainty about it. You won’t have to worry about damaging this thing, as it is built solidly and should last through many years of use.

You probably won’t find any materials that this saw would have an issue with. Whether you are cutting dimensional lumber, plywood, particle board, or hardwood boards, the saw will go through like a hot knife through butter.

Since it uses a 60v battery, the saw is just as powerful as any corded saw out there. While you might not need all of this power for all of your cuts, you certainly won’t ever run into any material that you can’t cut with ease.

Whether you need to making straight cuts or beveled cuts, the DCS575b can get the job done. The bevel gauge is simple and easy to read. It makes finding the right angle and getting it set quick and easy.

The light is a big help to illuminate any cuts, which will make them that much more accurate. If you get this saw, you’ll have no problem getting it up and running in no time.

The changing of the blade is especially smooth. The wrench that the saw comes with stores right on the saw itself so that it is always close at hand. Changing the circular saw blade will only take you a minute or two, and then you’ll be able to get right back to making your cuts.

The DCS575b is, after all, a circular saw. As such, there is always an element of danger during use.

Thankfully, the designers at Dewalt have tried very hard to make it as safe as possible. The electric blade brake is an awesome feature, as well as the guardrail on the blade. The shoe of the saw has rubber grips on the edges, too.

This helps to keep the saw from slipping, even if you lose your grip. All of these features combine to make this as safe a circular saw as you could hope to find.

To be sure and avoid possible danger you can read our article about circular saw safety.

This saw comes in three different configurations. The DCS575b is a barebone package in that you only get the saw, and nothing else. Which is why you need to be aware of the whether or not you can find the right blades on your own easily.

Luckily, the saw uses 7 ¼ “ blades, which are readily available in plenty of formats, whether you intend to do some ripping or more careful finishing cuts.

This his particular buying option is just the saw with no batteries or blades. That makes it a pretty affordable buy, especially if you already have the blades/batteries on hand. If not, then you’ll have to go out and buy them, which will add a bit to the price.

There really isn’t all that much about this saw not to like.

However, the one issue is that the shoe wouldn’t want to slide on rougher surfaces. This is probably due to the rubber safety grips on the sides of the shoe. It certainly isn’t the biggest deal, as all you’ll need is a little extra muscle to get the saw moving.

If you intend to cut unfinished lumber with this saw, you just have to make sure that you are prepared to push a bit harder on rougher wood.

So, is this Saw for You? 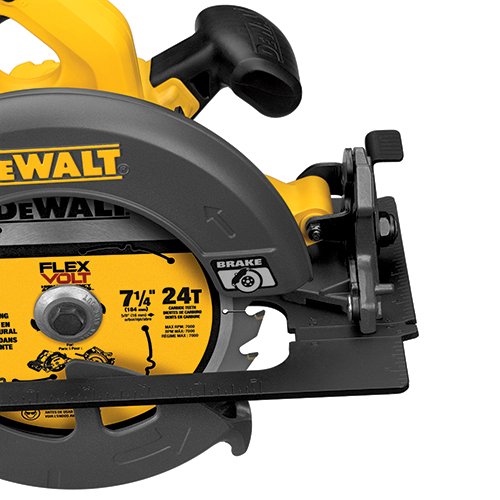 Whether you are a do-it-your-selfer or a professional contractor, the Dewalt DCS575b would be a great addition to your tools. It is a powerful cordless circular saw that is safe, easy to operate, durable and has a battery that will let you cut for a good long time.

To put it simply, it gets the job done quickly and easily.

Hopefully you enjoyed this DEWALT DCS575B review. It is a wonderful saw that has tons of great features.

While it is a cordless saw, the 60v battery helps to give enough power to its efficient brushless motor to cut through just about everything. It is also a really safe saw, with rubber grips on the shoe, an electric blade brake, and a blade cover. The ergonomic handle and easy to read bevel gauge make it a breeze to utilized effectively, and the LED light helps to keep your cuts as accurate as possible.

The only real issue with the saw itself is the shoe doesn’t always like to slide on rougher surfaces. However, if you add a bit of muscle to it, you shouldn’t have any issues.

Hopefully this article has helped you to decide whether or not you would like the DCS575b or not. It is one of the best cordless circular saws on the market today, and would make a great addition to your tool set. Best of luck, and happy cutting!