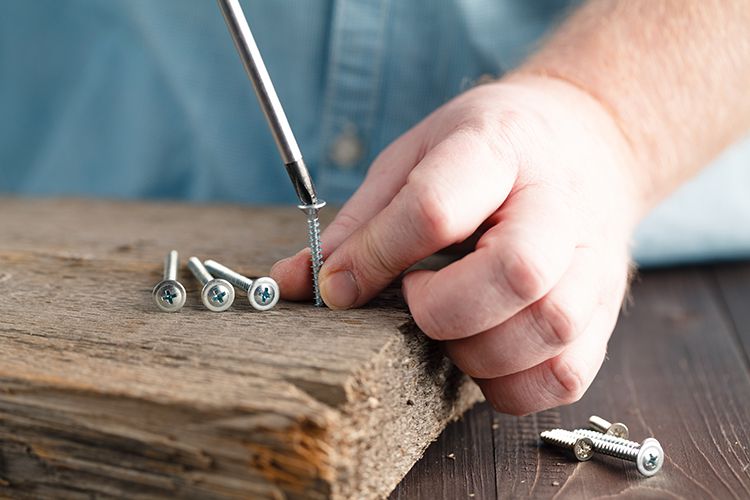 How To Use A Screwdriver

For such a seemingly simple tool, there’s actually a lot to learn about the legendary screwdriver.

It’s one of most useful and widely owned of any tool out there by hobbyists, home owners, woodworkers, mechanics, and plenty of others too.

After writing our best screwdriver set article, I found out something pretty surprising…

A lot of people actually don’t know how to use a screwdriver effectively – Do you? Read this screwdriver usage guide to find out!

I’ve got three simple steps to help you screw straight and true into wood, and that’s all you’ll need to know.

I might go so far as to call this the ultimate guide to screwing screws into wood with a screwdriver.

This is the first and most important step – and it’s also one that people tend to get wrong quite frequently.

Many inexperienced people think a screw can be driven straight into the material, without a pilot hole.

And of course you can do that, but in a material like wood, the trouble is that the screw tends to follow the grain of the wood rather than keeping straight.

And you can guess what that means – crooked screws. Yuck.

Pilot holes prevent this, as they create a nice straight guide for the screw. This makes life a lot easier for you – as you consistently place straight screws. Lovely.

There’s a secondary benefit of pilot holes, which might be just as important as keep the screws straight.

A pilot hole will also prevent the wood from splitting as you drive the screw into place. That problem is almost as tedious as the crooked screws.

So you’re taking care of two tedious birds with one stone – the humble pilot hole.

It’s also worth considering whether you’re working with a softwood or hardwood when it comes to making a pilot hole. You should also think about the size of screw you’re using.

For softwoods and small screws, you can make your pilot hole with a simple punch hole tool.

For hardwoods and larger screws, you’re probably going to want to make the pilot hole using a drill.

Now I know what you’re thinking – Why would anyone use a drill to make a pilot hole, and then a screwdriver to drive a screw into it… and, well… I have no idea. But there you have it.

Here’s where things start to get tricky (not really though).

It’s time to get the screw started in the hole. This is an important step, because if you don’t start the screw on a nice straight line at the beginning it can screw up (sigh) the whole placement.

So take the tip of the screw and place it in the pilot hole.

Then, take the tip of your screwdriver and slot it into the top of the screw. Hold the screw and driver shaft with one hand, and place your other hand on the driver handle.

Use your lower hand to get the screw and driver nice and straight with the pilot hole.

As you rotate the screw, it will start to engage the wood and grip into the sides of the pilot hole.

Once the screw engages the wood, the corked design of the screw should start to pull it further down into the wood as you rotate it further.

Once the screw is straight and starting to grip the wood, you can start to apply a little more pressure.

And then on to the final step!

Now that the screw is gripping the inside of the pilot hole, it should be able to stand by itself.

Focus on keeping the screw straight, and then just drive it in by rotating the driver. Apply enough downward force to keep the driver tip in the screw slot.

A quick side note

Have you ever dealt with those pesky screws that simply won’t stay on the end of your driver no matter what you try?

It usually happens when the screw hole is hard to reach, making it difficult to hold the screw to the end of the driver when starting the screw.

Well, I’ve got good news friend! You can magnetize any screwdriver in about 10 seconds – which will make these tricky holes much easier to manage, thanks to the screws being held to the driver tip through the wonderful power of physics.

Another thing to note is there are many different types of screwdrivers – it’s worth spending some time to learn about this, and to make sure you’re using the most appropriate type for the job at hand.

If you don’t already know, that means “there you go” (or something like that) in French.

And that’s really all there is to it – just keep driving until the screw is fully into the wood. Simple but effective screwdrivering in 3 steps!