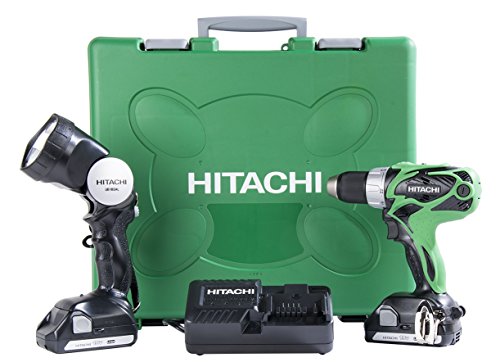 Hitachi is a company that makes a little bit of everything although we are just going to focus on their tool line today. In particular, a slick cordless drill in our Hitachi DS18DSAL review.

Hitachi DS18DSAL is a step up from a basic homeowner model and has a surprising amount of power for its size. We also think you’ll be pleased with the features the extras the company threw in. It’s an affordable drill and one that’s great for seasoned pros and rookies alike.

Who is the Hitachi DS18DSAL for?

Wondering if this particular drill is the one for you? Wonder no more as the Hitachi DS18DSAL is a drill that’s suitable for almost everyone.

While it wouldn’t be the best choice for mixing tubs of mud or hammering through brick, it can handle everything else you throw its way. Need to fix the gutter on the backside of your house or want to install a new deck? This drill can do it.

At 18-volts, the Hitachi DS18DSAL isn’t as beefy as some of the 20-volt models, but it is also not nearly as large. Compact and powerful are two words that come to mind once you have this drill in your hand, and you can adjust the power to suit your needs.

Need to sink a screw to where it stops just below the surface?

The clutch can take care of that, and there are 22 stages to choose from. The speed is set between 350 to 1,500 RPM, and the drill has a variable speed trigger as well.

You can take screws out as easily as you put them in with this drill and there’s more than enough torque to go around. It can drill through many types of metal, and wood is no match for the DS18DSAL.

If you read our guide to drill features, you already know how important the chuck is. If not, here’s a quick refresher.

The chuck is where you place your drill bit, and it’s a part that’s prone to break on cheaper drills. Plastic is not an ideal choice, but one that’s commonly used. Well, Hitachi decided to go with metal for the DS18DSAL, and you will be glad they did.

There are no keys to deal with on this chuck, and it’s made from metal, so it’s built to last. You can lock it down by hand in seconds, and swapping bits is just as quick.

The chuck is set to accept bits up to 1/2” which is the average for this class. 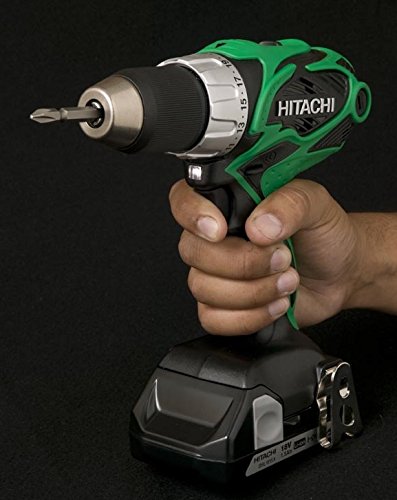 Compared to other 18-volt models, this drill is lightweight at only 3.5 pounds. That means it won’t tire you out regardless of your proficiency behind the trigger.

The contoured handle makes it easy to maintain your grip even in inclement weather and while the batteries aren’t aerodynamic, they drill is balanced and feels nice in the hand.

When you jump up to the cordless class, you usually get a few extra bells & whistles.

In this case, it’s a built-in LED light which may seem minor but is handier than you think. It also has a sturdy belt hook to ensure you can keep your drill close while you’re on the job.

This isn’t a full-fledged kit, but Hitachi was nice enough to kick in some cool extras with the DS18DSAL. It comes with the company’s UB18DAL Lithium-ion flashlight which is adjustable from five different angles.

You’ll also get a strap, but the carrying case is the real extra. Having a case for your tool is always a plus, and this one is tough enough to keep your shiny new drill from taking a beating.

This is one area that’s up for debate to a degree because it all depends on how you use your drill.

If you’re trying to drill deep holes into a thick piece of hardwood, it’s obviously going to suck more juice than putting a screw into sheetrock. While it is an 18-volt tool, the battery is only rated at 1.5 Ah, so while it’s powerful, it doesn’t last that long.

That said, while we won’t put a number on it, the battery life is better than average. It will likely last longer than you’ll need for general use. You also get two of those 1.5 Ah batteries to go along with a charger.

Founded in 1910, Hitachi has been around for ages and has maintained a reputation for excellence in several different fields. They have divisions that cover everything from defense systems to railroads, but Hitachi Koki handles the tools.

Quality comes first with their power tools, and we can’t find any major faults with the Hitachi DS18DSAL.

You can easily replace the brushes on this model if you experience any issues which greatly increases the life of your tool. They also have the best warranty in class with 10-years on their lithium tool lineup. The batteries have a separate warranty set at 2-years.

No product is perfect. As much as we like this drill, we did come across a few negatives in our Hitachi DS18DSAL review.

The main flaw in our eyes lies with the battery life. While it’s nice to get two batteries with this drill, they are small, and 1.5 Ah is considerably lower than other models at this price point. It’s not underpowered, but the horsepower is something to consider as well.

DeWalt and other manufacturers have drills rated at 20-volts or better, and brushless motors are more efficient.  While we appreciate the fact you can replace the brushes with ease, it just doesn’t have the same bite as slightly larger models.

If you’re interested in a tool system, you may want to look elsewhere as this setup isn’t as compatible as other models from Hitachi.

Some Simple Pros and Cons of the Hitachi DS18DSAL

There are a number of pros and cons to owning the Hitachi DS18DSAL. We have listed some of the main pros and cons of this drill below:

As you can see from above, the pros really do outweigh the cons. This is a very powerful drill that can do an excellent job, no matter what it is that you are currently working on. If you are looking for a drill that really delivers, then the Hitachi DS18DSAL is definitely the right choice for you.

How much power do you need and are the extras worth the trade-off?

Unless you just love the company’s tools, you need to ask yourself those two questions if you’re still on the fence about the Hitachi DS18DSAL.

The case and extra battery are nice although you can find drills with larger motors or excellent bare tools at the same price. While affordable and powerful enough for most folks, it is a far cry from a heavy-duty industrial drill.

So is this the drill for you?

If you need a cordless drill that can do a little bit of everything and will likely outlive that long warranty, this is a great choice. Alternatively, power-hungry users may want to consider other options.