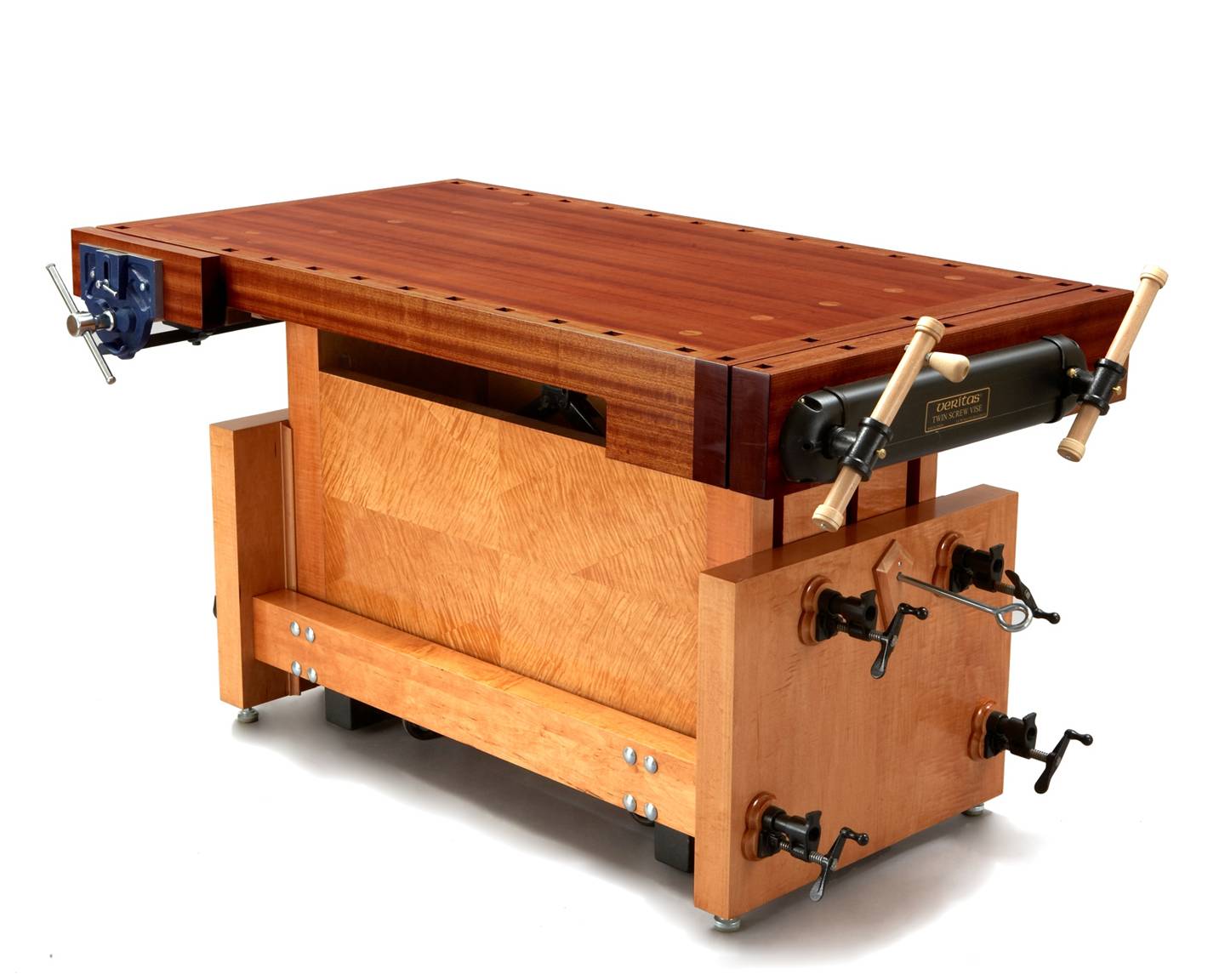 An Adjustable Height Odyssey – How and Why I Built This Workbench

I had a few problems with my first workbench. It was too low for carving or for detail work, it was too high for assembly, it was also too high to sit behind my table saw, and it was difficult to move around. It was anything but ergonomic!

After some thought, I concluded that an Adjustable Height Workbench  could solve all of these problems.  I then searched the internet to find one and the only option I found was unacceptable to me because it was slow and difficult to actually adjust the height.   I decided to design and build one myself, and so my journey began.

The first thing I did was to set some criteria, things that this new bench must have to make it worth the effort.  Here is what I came up with:

I had no idea what the bench would look like, but I was determined to meet all of my criteria.  I gave this a LOT of thought, in fact, I couldn’t stop thinking about it.  My mind went from one idea to another and it kept me up at night, literally.  I researched workbenches, I read books and asked other woodworkers what they  thought the perfect workbench would look like. 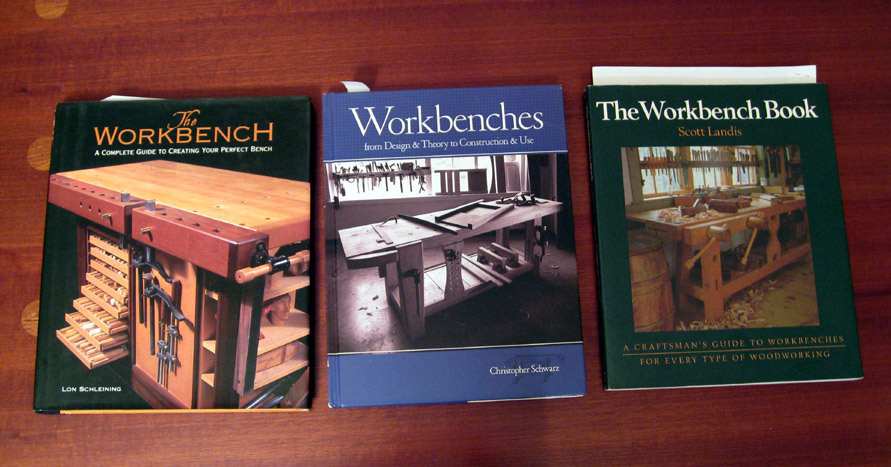 I read books by Scott Landis, Lon Schelling, and Christopher Schwarz.  Chris Schwarz’s book is quite good, but it had too narrow of a focus for what I wanted.  The Lon Schelling and Scott Landis books are quite similar, but my favorite of the three was The Workbench Book by Scott Landis.  The reason I liked this one the best is because he was not stuck on any one particular design.  He did not try to say that any one work bench design was best for everyone. What he did instead was to show all sorts of different workbenches and explain their benefits.

After all the research and all the time working on it I finally got a design in my head, but I had to make a cardboard model to see how it would actually go together. 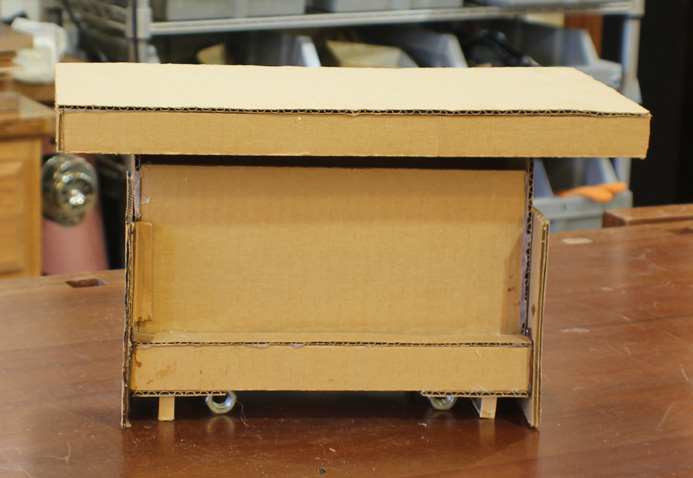 I worked with the model and developed the design until it perfectly met all of my criteria; solid, functional, mobile, ergonomic, easy to operate, and plenty of adjustability!  What I came up with is a bench with rectangular legs that slid past each other.  Some people would describe the legs as “telescoping”.  These two sets of legs are held in place with some ordinary pipe clamps.  I simply loosen the clamps and adjust the jack to change the bench height.  When the bench top is where I want it, I snug up the clamps and the bench is as solid as a rock!

You will notice in the drawing below that there are two scissors jacks.   The primary jack adjusts the height of the bench top and the other one lifts the entire bench up on to a cart that is nested below the bench. 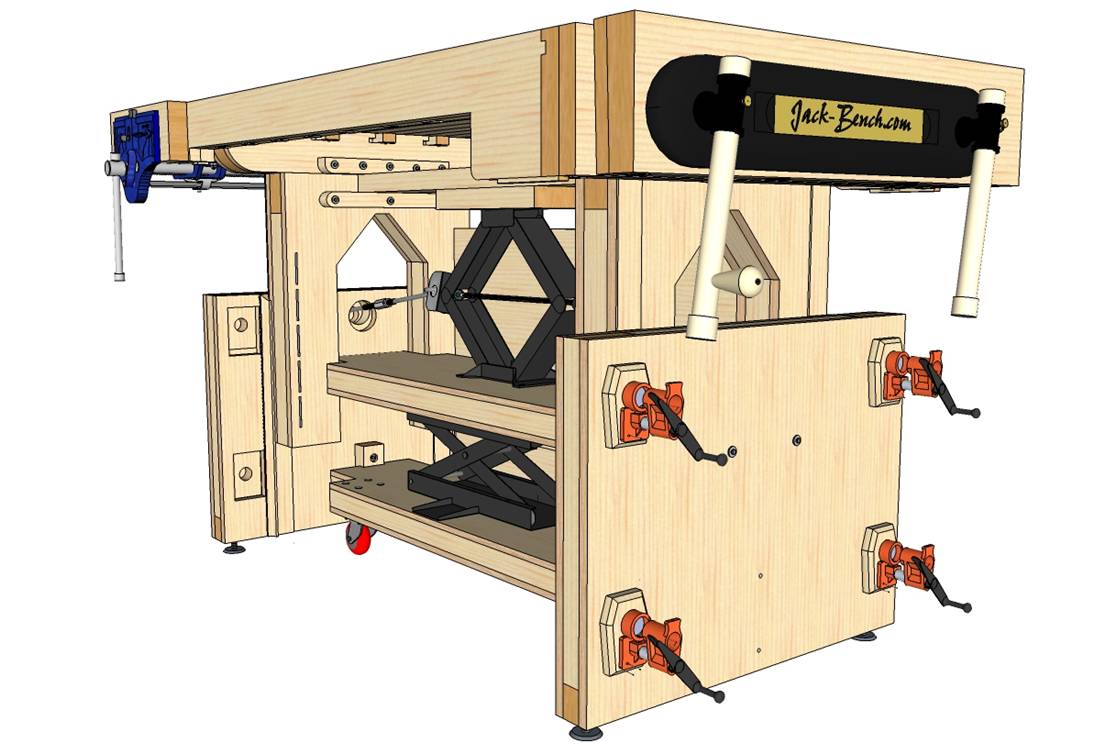 Actually, if you look closely you will notice that the design in the drawings is slightly different than the design of the bench in the photo.  The difference is that the first design, the one in the photo above, has one stretcher and the upper set of pipe clamps go through the inside of the base.  On the second, improved design, there are four stretchers and the pipe clamps are concealed inside of them.   The revised design is much easier to build than the original one. 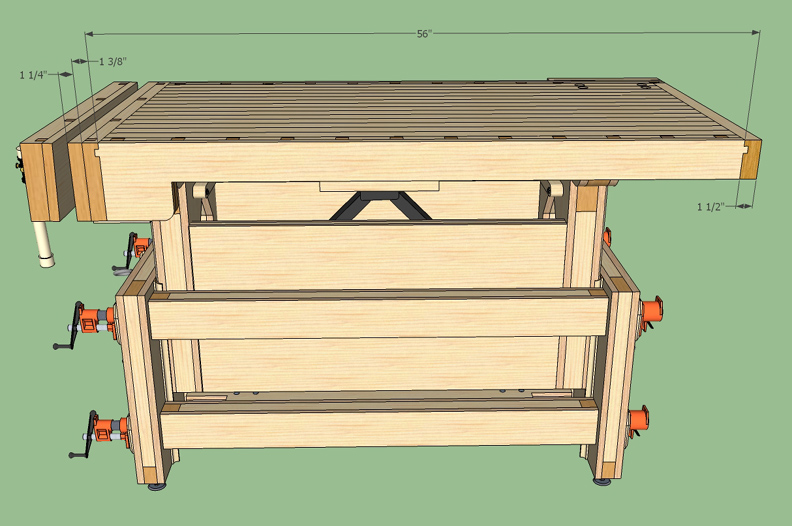 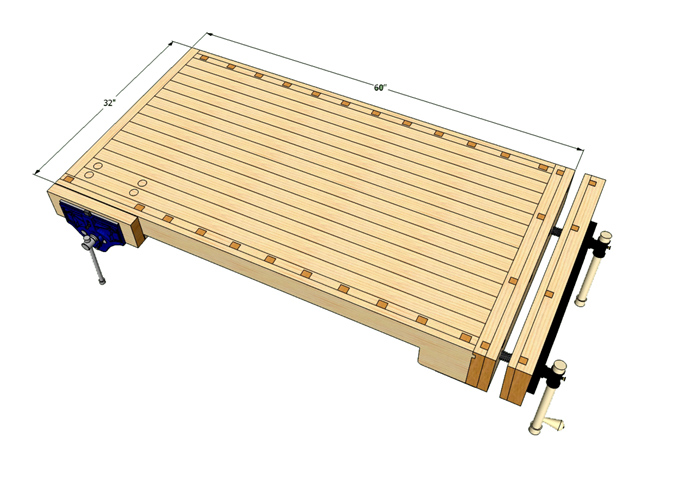 The bench top includes everything I wanted, a quick release face vise, bench dogs, and a twin screw vise that doubles as an end vise for the bench dogs. I am thrilled how it turned out!

Charlie Kocourek is the designer of the Jack Bench Adjustable Height Workbench.  You can see more of his work on his website: Jack-Bench.com or on his YouTube Channel: Jack Bench Woodworking. He also produces woodworking articles and videos for the Woodworkers Guild of America.   You can contact him at: Charlie@Jack-Bench.com