There are some things that are so fundamental that there’s simply no alternative.

Let’s say you needed to cut a beam of wood in two – what tool are you going to need?

People have been using saws in various forms for several thousand years – probably just as long as we’ve been using tools, really. Simply defined, a saw is a tool made with a toothed edge for cutting through wood, metal, stone, masonry, and other materials.

Saws come in a variety of shapes and forms for just about any kind of task you can think of, but as a DIYer, you’ll need to know about the most useful and most common ones.

Saws can be split into two groups:

The latter includes saws powered both by electricity or other means, such as water power or compressed air.

Regardless of type, the following terms apply to all saws: 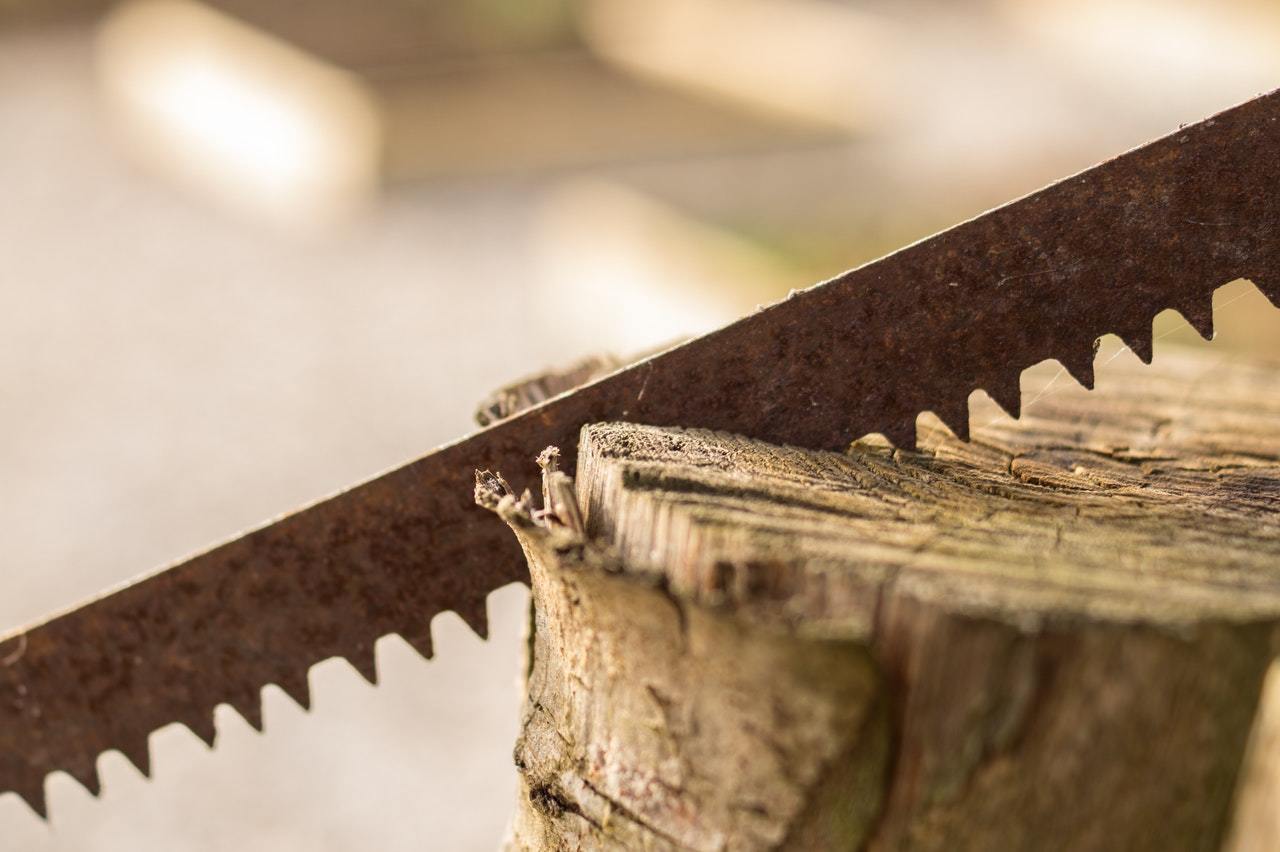 Teeth: the part that does the actual cutting. There will be a different number of teeth per inch (TPI) depending on the type of saw and its purpose. A saw for intricate work, for example, will have a high number of fine teeth for the detailed work it’s used for, while a circular saw will have a smaller number of larger teeth for rapid, rough cutting.

Set: this refers to the degree to which the teeth are bent outward from the main body of the blade, and is determined by the purpose of the saw.

Kerf: refers to both the width of the saw blade’s cut and to the channel it leaves after cutting. Remember that ‘kerf’ is not the same thing as ‘width.’

So with all that in mind, what do you need to know about saws to be an expert?

The most important part of any saw is the one doing the bulk of the work:

The earliest saws were made from natural materials such as obsidian or even animal teeth, before humans learned to work metal and began making saw blades out of copper, bronze, and iron. When beginning a job, it’s best to be sure of the type of blade you’ll need.

So what types of saw blades do we use now?

Here are the ones you’ll encounter most often:

Favored for its low cost, durability, strength, and clean cut, steel is used in nearly every saw blade available today.  These range from ordinary milled, stamp-cut steels, and high-tensile steel alloys (for industrial purposes), to artisan steels for specialized trades such as jewelry-making or woodcarving.

Tungsten carbide is a compound of equal parts tungsten and carbon. This material is compressed into a metal twice steel’s stiffness and density, making it ideal for heavy-duty cutting jobs. It’s made into blades which can either be entirely composed of the compound, or tungsten carbide-tipped. 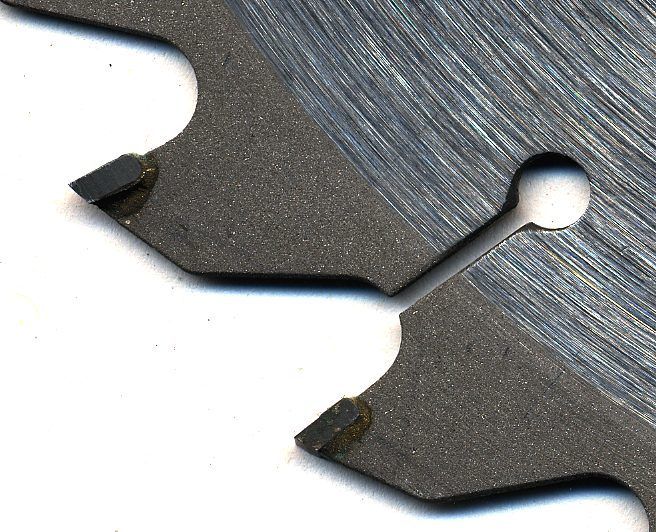 These blades are especially useful in high-heat, high-pressure environments such as heavy machine shops, steel mills, and mines.

Diamond, one of the toughest substances available, generally found in large quantities as well, is one of the best materials around for the most challenging cuts. These saw blades can be made with either synthetic or natural diamond fixed to the cutting edge of the teeth. 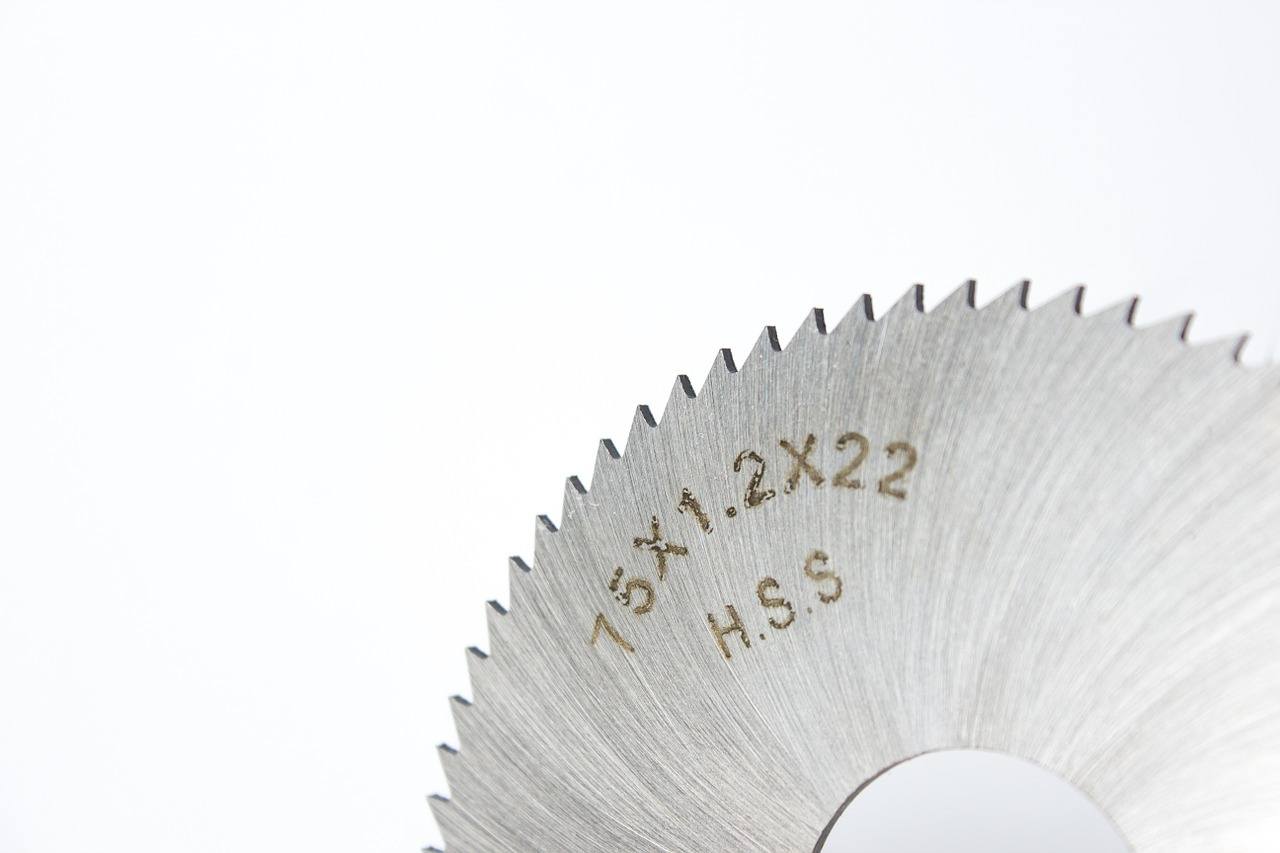 Diamond saw blades are made for general purpose cutting as well as for cutting tougher substances, such as marble or granite, steel and iron, glass, gems, tile, and of course, woods of all varieties.

The original saws relied on the operator’s arm strength to get the job done. Typically used for softer materials such as wood and drywall or for tasks that call for a careful hand, these are your go-to workhorses.

These are what probably spring to mind when you think of hand saws, not least because they’re pretty frequently referred to as just that. These consist of a single triangular blade set in a wooden or plastic handle. The kerf of the teeth in these saws is set so that they “rip” the material they’re cutting through (usually wood).

The fact that these are frequently included in basic toolkits and are the ones most people have used before speaks to the fact that they’re good beginner saws – perfect for basic tasks, easy to learn to use, and reliable for most home and hobby jobs.

These fall under a subcategory of saws called ‘bow saws,’ with the blade held under tension in a metal frame. Coping saws are used to cut precise curves and coped joints, which fit together along contoured lines for cabinets and moldings, among other things. These saws have a similar function to jigsaws. 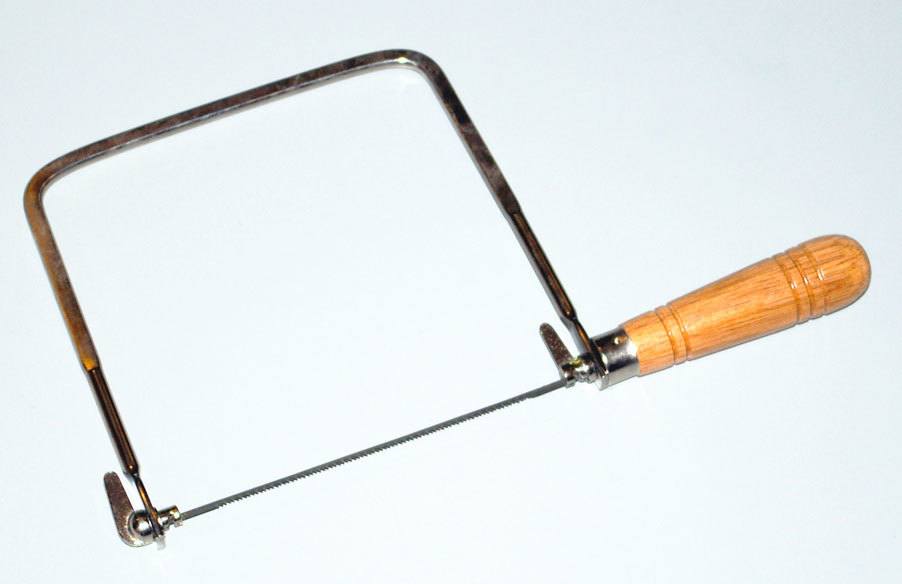 While there are powered saws that can accomplish this same task now, many prefer coping saws for the greater control that they give and for the ability to concentrate on fine cuts.

If you’ve ever seen a prison break movie, you can probably guess what these are for.

Hacksaws are ideal for cutting through tougher materials such as steel piping, resilient plastics, and hardwoods. They’re particularly useful for smaller pieces of material or in tight spaces 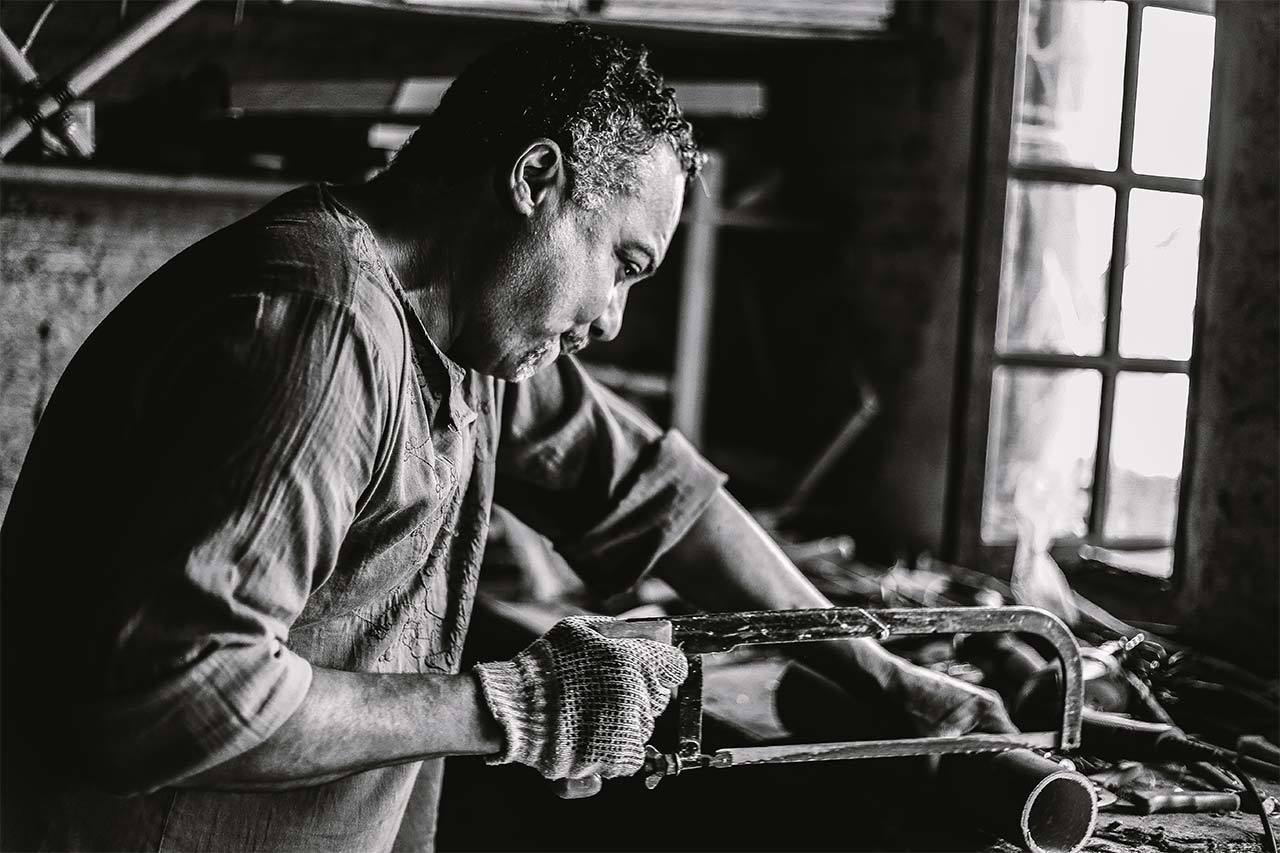 These are usually made from tougher steels called high-speed steel and you’ll often find them in plumbers’ and electricians’ toolkits, for the reason that these are often the best choice for quickly sawing through tough substances.

If you’re looking to cut small holes or shapes in drywall, plaster, or softer woods such as balsa or pine, this is what you want. These small hand saws feature a thin, tapered blade with a pretty low TPI, usually set into a pistol-grip handle.

Simply punch a hole into the surface you’re working with, insert the keyhole saw, and quickly cut the desired shape.

Cards on the table: these are pretty cool.

There are more than a few good reasons why these are still popular with woodworkers. Unlike most European-style saws, which cut as you’re pushing them, Japanese saws cut on the ‘pull’ stroke – as you’re drawing it back through the material towards you.

A clear advantage of the Japanese saw is that cutting on the pull stroke results in a cleaner, more precise cut. They’re pretty versatile, too, working equally well for hard and soft woods.

Since they’re made up of a short, sturdy blade on a long handle, they can also be used for objects which would otherwise be awkward or dangerous to reach, such as overhanging ends of rafters or joists, or tree branches. They can be single- or double-sided, and there are subtypes for flat surfaces, rough pieces like logs, or detailed work like cabinets or decorative panels.

While these are usually thought of as modern electric models, those are just one kind of powered saw. Sawing is hard work, and as long as craftspeople have needed to cut materials, a few clever people have figured out ways to make tougher tasks easier and simpler. 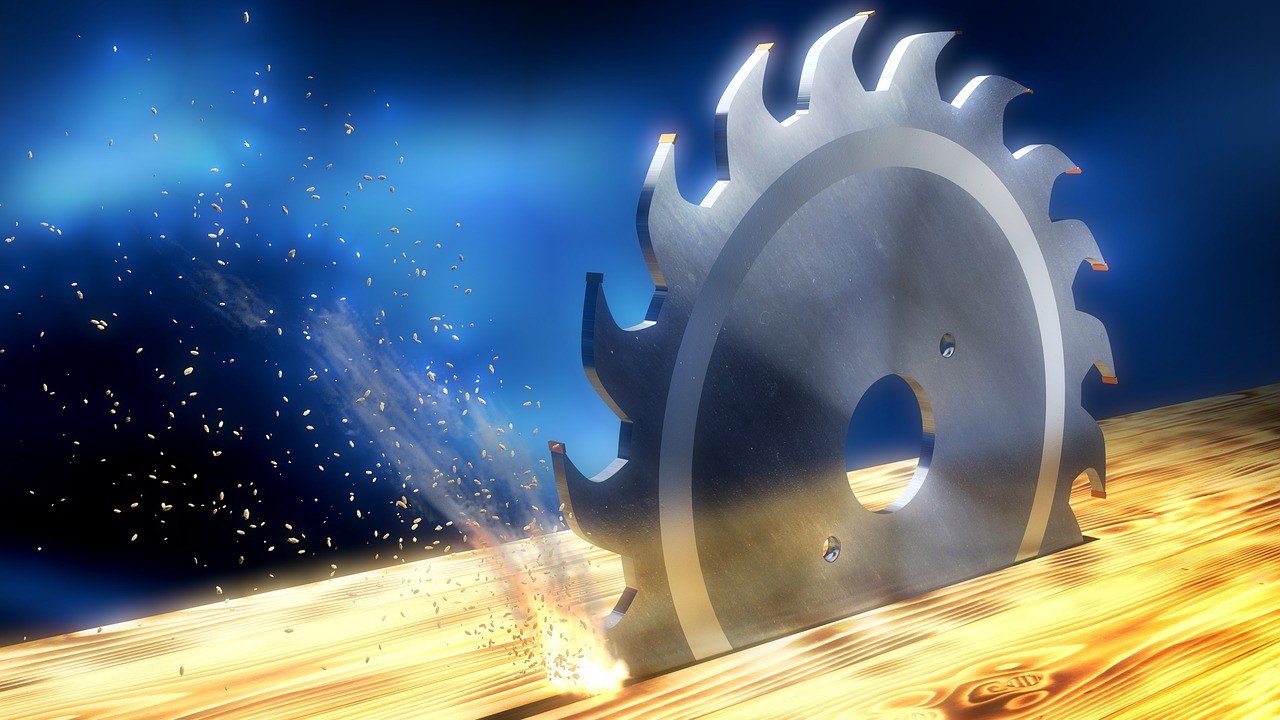 One example would be water-powered shingle saws, which used to be very commonly attached to old-fashioned grain mills, taking advantage of the energy of a millstream to rotate a blade to quickly cut large quantities of wood.

Rather than simply replacing hand saws, powered saws have evolved to answer specific needs that simpler ones simply can’t handle. Because these saws are by far the ones most often involved in accidents, some training and care is recommended before using them, but with sensible use, they can be extraordinarily useful tools.

Sometimes called by the most popular brand name, Skilsaw, these are the most common type of powered saws. These electric saws can carry a variety of different circular blades. 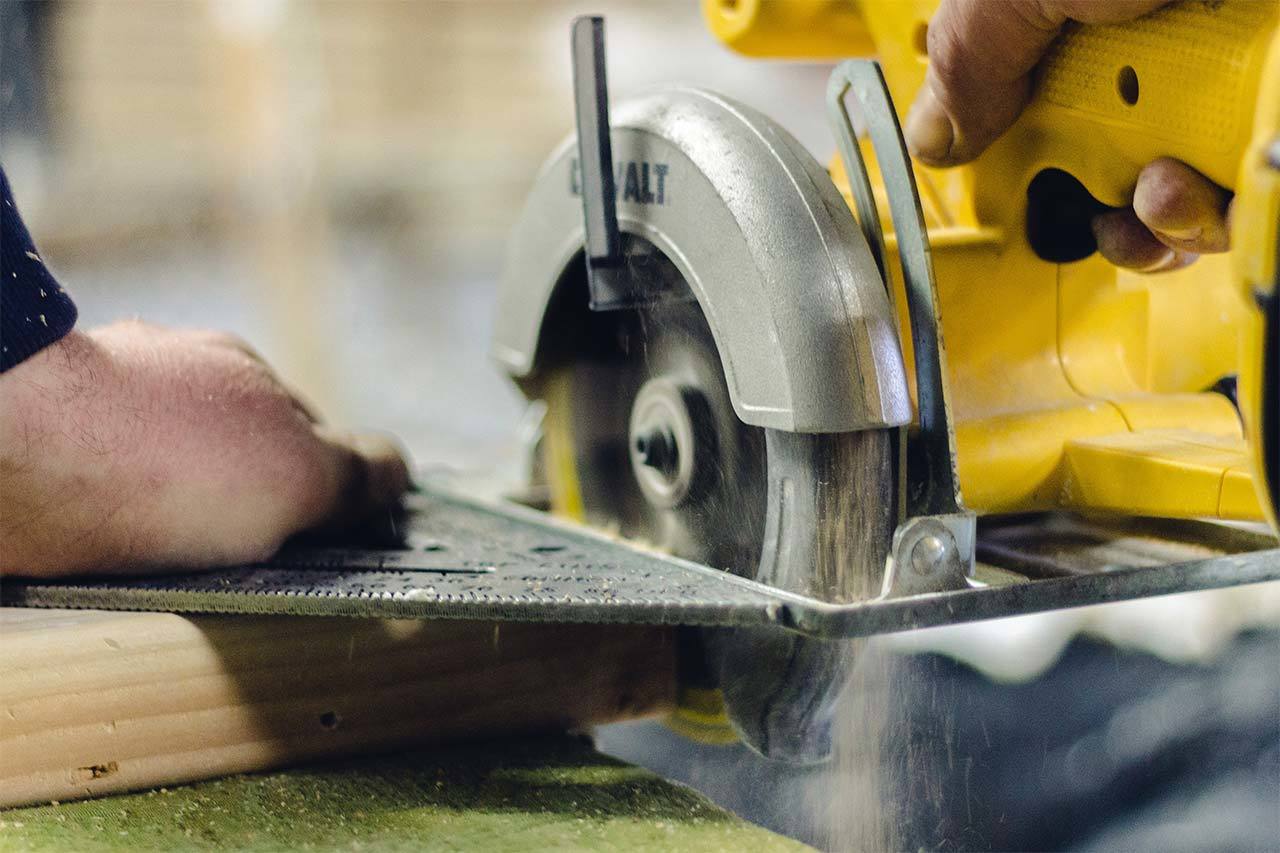 The blades you’ll see most often will be between 7 and 9 inches in diameter, with a small number of larger teeth per inch to cut quickly, cleanly, and reliably through rougher materials such as wooden planks, harder insulating materials such as dense solid foam board, or drywall.

Originally appearing as mechanically-powered variants in mills, they can still be stationary or, frequently, hand-held, and are very popular for DIY uses and professional uses alike.

If you’ve ever been in any well-equipped workspace, you’ll have seen one of these. Miter (mitre outside of the US) saws are set on a movable arm which can be brought down carefully and precisely onto whatever’s on the cutting bench to produce a miter cut, a cut made at a specific angle to fit with another piece at a complementary angle.

You’ll often see these being used in all kinds of frame-making and simple box-making, the most common angle being 45 degrees to produce a firm, 90 degree joint, but of course they’re not limited to this. Octagonal window frames, for example, will often incorporate miter-cut wood for a sturdy shape.

Bench-mounted miter saws can be adjusted by lifting a pin in the frame so that the whole device can be swung into place to achieve the desired angle.

Table saws are the most versatile heavy-duty saws that most professionals or hobbyists will need. These consist of a circular saw blade mounted in a special table, with the motor fixed underneath the tabletop. 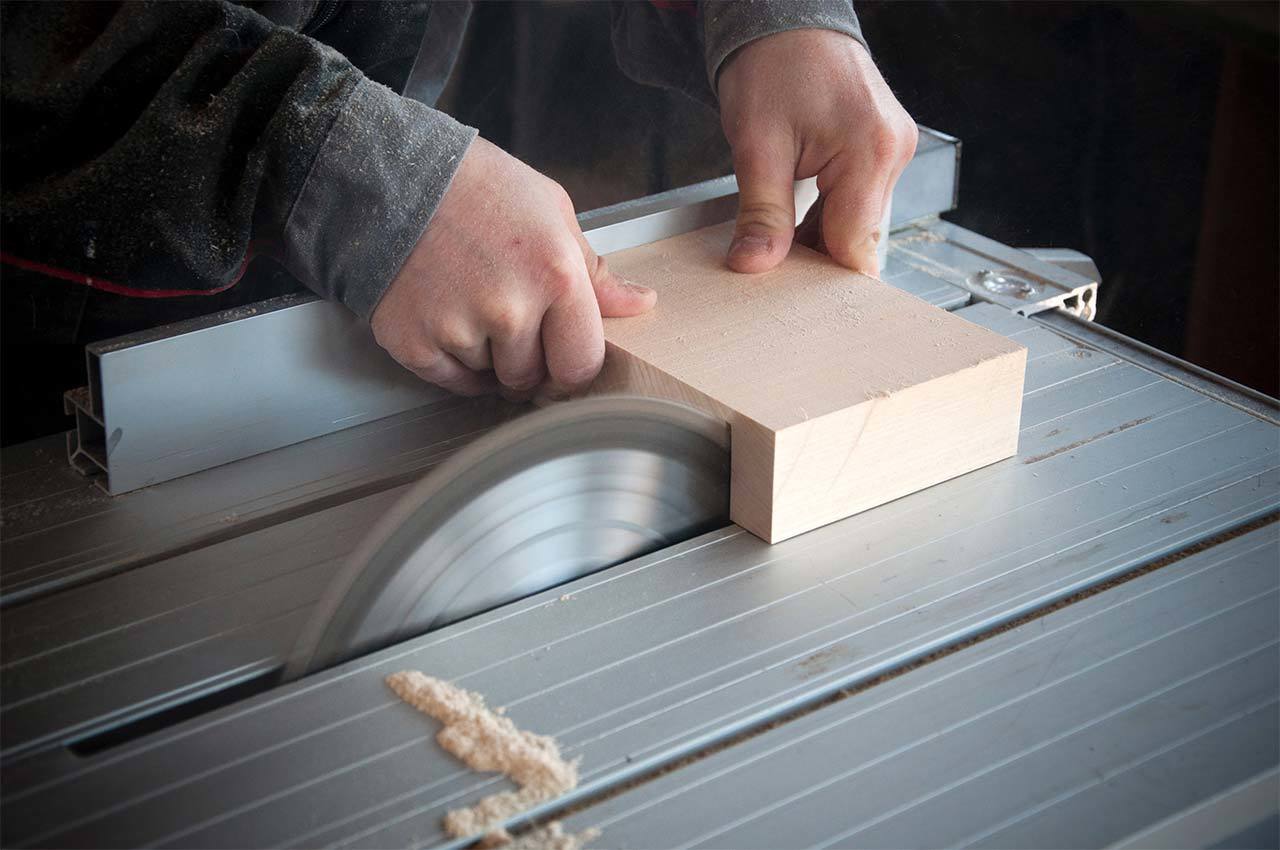 These are mainly used to cut wood, although some professional models can be fitted with masonry or metalworking blades. The depth of the cut can be adjusted by raising or lowering the blade, so with a shallower depth, the cut can be made partially if only a groove or a scored surface is desired.

Table saws are particularly useful for rough cuts and for quickly producing a large number of pieces to the same dimensions – for example, wooden planking for siding or shelving.

Probably one of the most popular and versatile of portable saws, the chainsaw is a type of band saw, saws whose blades are formed of a loop with the teeth on the outer edge.

Most commonly used for logging, engineering work, landscaping, and chainsaw carving, this saw consists of a chain with teeth set on the links, mounted on a broad piece of metal called a guide bar, and powered by a small internal combustion or electric motor. 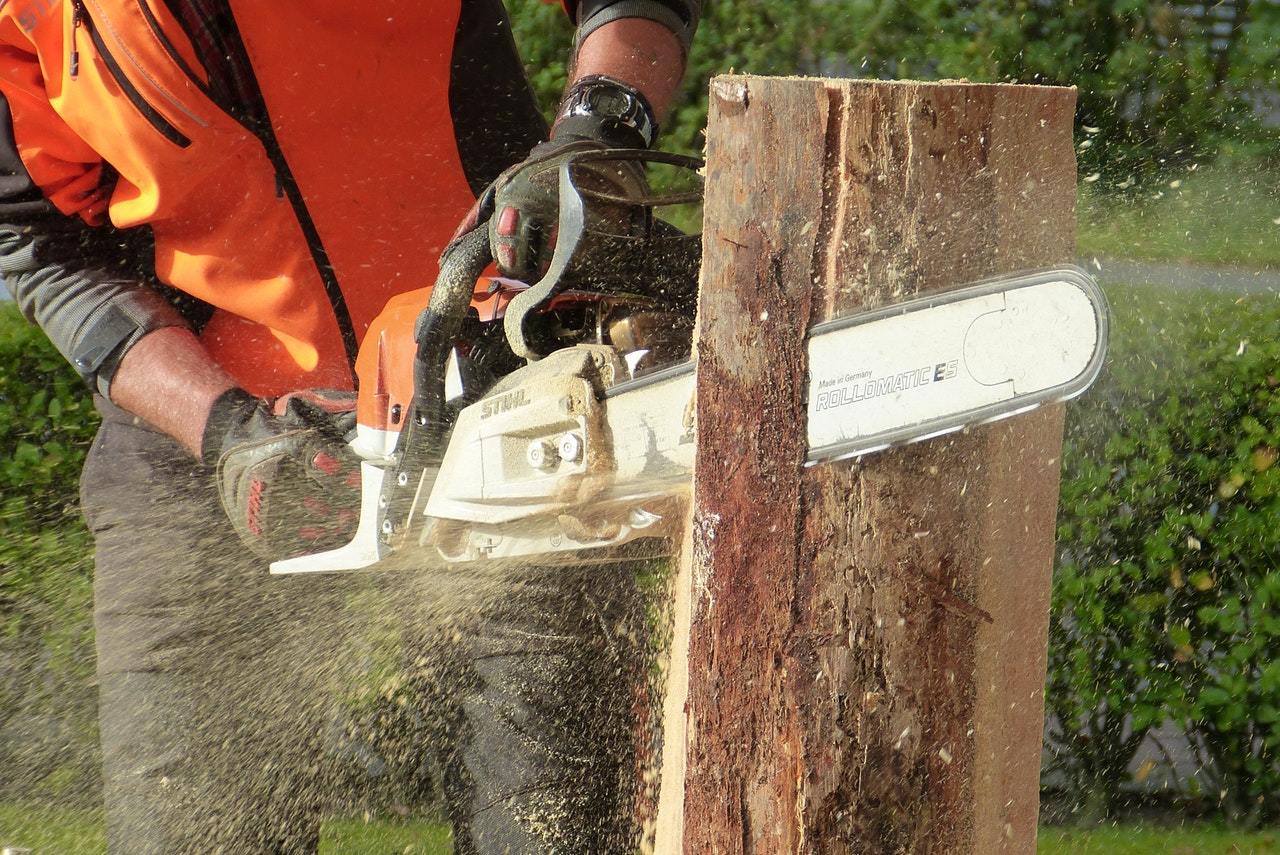 A distinct advantage of chainsaws is the greater surface area of the chain, resulting in better heat dissipation than other powered saws, thus cutting down on the risk of overheating the blade, burning out the motor, or damaging the material being cut.

This is one type of power saw which you’ll really want to get some instruction with, as a large, gasoline-powered saw is particularly dangerous in the hands of an unschooled beginner.

Choosing the Right Tool For the Job

No matter what you need to cut, no matter the shape, and no matter the scale, there’s a saw that’s perfect for the job. Remember the information in this list and remember that it’s always a good idea to ask a professional when choosing a saw.